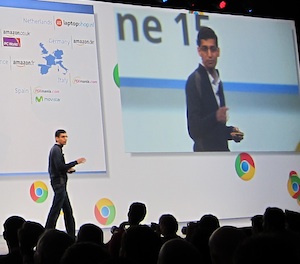 To me, the most interesting aspect of Google’s Chromebook unveiling today may have been a sort of rallying cry that was more or less whispered. At first when Chrome head Sundar Pichai said it on stage, I was sure he’d get an ear-full from the Google PR team and that would be that. But when he said it again in the press Q&A.

Users are free to jailbreak and hack Chromebooks. In fact, Google seems to be downright encouraging it.

Perhaps this shouldn’t be too surprising given Google’s nature and their constant talk of “open”. But Chromebooks aren’t just a Google project, they’re Google teaming up with partners to make these things. That means hardware partners and network partners.

During his keynote, Pichai prefaced his jailbreak comment by saying that perhaps not everyone would love him noting this. Heh.

Then during the press Q&A, when Dutch journalist Alexander Klöpping asked about the possibility of installing Chrome OS on a MacBook, Pichai noted that Chromium OS was open source and developers would do as they pleased with it. But Chrome OS is very much Google’s, and the partnerships for Chromebooks ensures things like verified boot that works behind the scenes in seconds.

Okay, that sounds more in line with a corporate message. But then he followed that up by once again noting that “you can take any Chromebook, flip a switch, and install whatever you want.” Again, he used the keyword “jailbreak”.

Also worth noting, Chromebooks are not SIM-locked. This means you can swap carrier SIMs in and out to use whatever carrier you wish. This is particularly useful in places like Europe, Pichai noted.

So there you go, with Chromebooks, Google seems to be awfully cavalier in their thinking. Awesome.