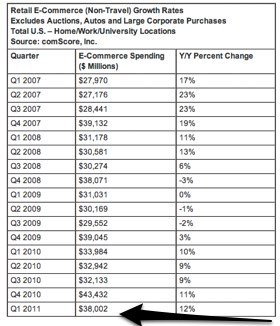 comScore says the 12 percent growth in the quarter was due to an increase in number of buyers (up 7 percent) and transactions per buyer (up 9 percent), but accompanied by a slight decline in dollars per transaction (down 4 percent). Additionally, one of the drivers of an increase in spending online is that online retailers are often offering lower price points than brick and mortar stores. And this quarter’s growth in e-commerce spending was roughly double that observed at offline retail.

The top-performing online product categories were: Video Games, Consoles & Accessories; Books & Magazines; Computers/Peripherals/PDAs; Consumer Electronics; and Computer Software (excl. PC Games). Spending in each of these categories grew at least 13 percent in first quarter from a year ago.

comScore cautions that online spending could decreases if high gas prices continue to eat into discretionary spending, but it is good news for e-commerce sites, both big and small, that more consumers are looking to the web for shopping. While the holiday shopping season is still six months away, signs point to e-commerce spending reaching record levels once again.