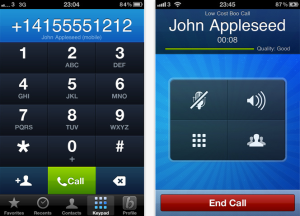 Cell phone bills are expensive, and carrier contracts are binding. We need our cellphones, but that doesn’t mean that we’re not always looking for cheaper ways to make calls. Voice-over-IP services have come a long way in the last few years; Skype has perfected desktop-to-desktop calling, and Google has given us free VoIP domestic calling on Gmail — talk over WiFi on email from the comfort of your couch. But, the next new frontier has become WiFi and VoIP calling on mobile.

There are quite a few players already in this space. Pinger allows you to make calls over WiFi, and my colleague Alexia Tsotsis recently wrote about Talkatone, which uses Google Voice as a channel to allow you to make unlimited calls and send texts over WiFi. But, with each of these, there is always a catch. In Talkatone’s case, to receive incoming calls, you have to upgrade your Google Voice account to get a phone number and tinker with you Google account.

So, here we have these intelligent devices we use to make phone calls everyday, aptly called smartphones, but if our phones are so intelligent, why can’t they, say, recognize when WiFi is available and automatically allow us to take advantage of low-cost or free calling using the available WiFi network? Well, now thanks to a service called Bababoo, they can.

Sure, it’s not a terribly appealing name, but it’s certainly an appealing idea. Bababoo is a new telecommunications startup (and app of the same name) that is bringing “intelligent” calling to smartphones. What does that mean? What’s so smaht about it? Bababoo’s iPhone app gives the users the ability to make calling through WiFi, 3G, and the iPhone’s carrier networks, AT&T and Verizon, but you don’t have to change your network, your number, or caller ID. You just open the app, dial, and Bababoo does its thing.

So, as an iPhone user, you get to keep your cell phone number, which is a great start. But let’s say you’re using WiFi to make a call, but the person you’re calling doesn’t have WiFi available. In most cases, this means you either can’t make the call, or you’re charged a lot to do so. With Bababoo, as with Pinger and Talkatone, if WiFi is available for both parties, then you get to connect with the person you’re calling over WiFi for free.

But, if both callers aren’t on WiFi, Bababoo still connects the call, and it finds the cheapest and most seamless way to do that. You will be charged, but the standard rate in the U.S. is 2 cents per minute, which is comparatively cheap. And here’s the coolest part: Let’s say WiFi is of poor quality, or can’t be found; with most other apps, you’re screwed, but since Bababoo integrates with your carrier as an iPhone user, Bababoo simply switches you over to the 3G network so that you can still make the call. There’s no hanging up, or dropped call, or switching apps, Bababoo just does it for you, naturally.

Standard rates apply to that 3G call over AT&T’s network, you don’t pay anything extra to Bababoo, you just pay what your normally would to make a call on your AT&T or Verizon service plan.

So, when using Bababoo, you don’t have to sign up for any service plan, you simply pay-as-you-go. You can use your iPod or iPad as a phone, and you can make unlimited group calls, and you can register as many numbers as you’d like — which means no porting numbers.

Android and Blackberry functionality is not yet available on Bababoo, but Co-founder and CEO Buck French tells me that both will be available next year.

When the team of co-founders originally began brainstorming an idea for a startup, they were kicking around several ideas. But, since they were each in different places around the globe, and their international calling bills were huge, yet their phones had Internet access more than 75 percent of the day, the mission became clear.

Bababoo was a result of the frustration of not having a simple way to take advantage of the internet to save money on calling. They found it odd that there were literally hundreds of cheap calling apps on the market, French tells me, but most are used by entrepreneurs and techies. Business people and mainstream users, however, don’t, because they only work in certain conditions and often come without the benefit of an intuitive interface. Thus, the team aspires to bring cheap, VoIP calling, and seamless transitioning between 3G calling and WiFi calling, to the masses.

It’s an ambitious project, but Bababoo is announcing today that it has also raised $1.5 million in seed funding from Sierra Ventures, which will certainly help the cause. French tells me that Sierra has been an investor in prior companies that both he and co-founder Phil Tee have worked on, and will likely be looking to infuse more capital if Bababoo gains traction.

The founding team also seems to have an impressive track record in the software and telecom spaces, as French founded OnLink, which he sold to Siebel for $609 million in two years, Tee founded Micromuse, which went public, and later sold to IBM for $850 million, and VP of Infrastructure, Dan Lane, has founded 6 telecom companies to date. And let’s not forget Bababoo’s CTO, the awesomely-named Tony Million, who is also the founder of 2 web software startups.

French tells me that the team plans to use Sierra’s new funding to expand the team, and continue building and improving upon current offerings — all in an effort to give the average cellphone user the ability to make calls anywhere, anytime using the cheapest means possible when available, and carrier coverage when not.

And considering that the CEO said that Bababoo can drop the average AT&T bill by $20 a month, I’d say we have some financial incentive to give it a try.

For more of an intro, check out Bababoo’s video below: