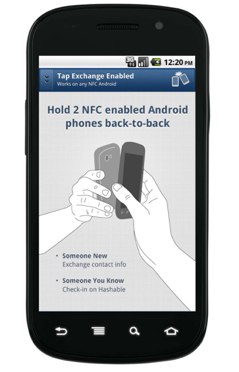 When people talk about near-field communications (NFC) chips in phones, they usually bring up mobile payments. But NFC chips, which are already in some Android phones, can be used by other apps besides payments (which won’t take off as quickly as people expect anyway).

At Google I/O this week, NFC apps will be highlighted. Foursquare will allow Android users to check in by swiping their phones near posters with NFC chips. Also just in time for I/O, Hashable’s Android app now supports NFC features as well. Android users can swap contact info via NFC, and also check into the same activity with someone, like #dinner or #drinks.

Hashable is a lightweight way to track the people you meet and exchange contact info. It’s completely replaced business cards for me. But on my iPhone, I still have to enter the person’s email or Twitter handle. With the Android app, if you meet someone else with an NFC-powered phone, you can just hold the phones next to each other and contact info will be exchanged via the app. It’s like Bump, without the fist-bump.

If the other person is a new contact, Hashable will add that person as one. If it is an existing contact, it will trigger the check-in feature, which on Hashable allows you to check into people instead of to places. It’s a way of noting that you are doing an activity with someone to remember later or broadcast it out to your network. The Android app also now includes a QR-code reader incase someone hands you a card with one of those. Scan it, and throw it away.