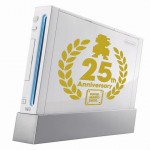 Let’s ignore that 2010 was the 25th anniversary of Super Mario Bros. because these are pretty sweet Wii Decals. They’re only $7.99 and come in black, red, gold, or white for those non-standard Wiis. Shipping is only $1 for within the states and $2 everywhere else. If SMB isn’t your thing, the Etsy store is loaded with other decals for gaming systems, computers and toilets. [Etsy via TinyCartridge