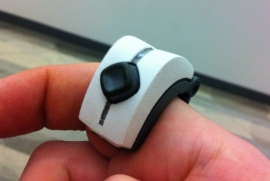 I wrote a while back about the limitations of a direct-interaction interface, and of course the lack of buttons and such makes for a different UI from the start. But would you say your tablet needs this Ringbow thing?

My concern is that instead of a UI that focuses on native usability (i.e. natural gestures, working within the limits of direct interaction), we’ll get one that mimics PCs. I’m not saying we shouldn’t have complex interfaces on our tablets, but I don’t think an accessory like this is the way to go about it.