The U.S. solar industry is banding together to fend off an onslaught of global competition, and to lower the cost of manufacturing solar technology domestically. To make it happen, the newly formed U.S. Photovoltaic Manufacturing Consortium (PVMC) secured a $57.5 million federal grant from the Department of Energy Sunshot Initiative, along with financial commitments totaling $400 million from various state and corporate entities.

Today, the PVMC revealed (in an exclusive to TechCrunch) who its earliest members are, including cleantech businesses more often seen as competitors, not collaborators. The list, which follows at the end of this post, encompasses raw material suppliers, the makers of metrology, modules and other solar equipment, major universities, and high-tech research and development laboratories. They are focused on thin film, or copper-indium-gallium-selenide (CIGS) technology in particular.

CIGS solar photovoltaics work by absorbing solar photons and converting part of that energy into electricity, or storing part of it in a chemical reaction. CIGS solar panels, unlike others, can be manufactured so that they’re flexible and comparatively lightweight, which means they can be incorporated into a variety of architectural designs and space-limited applications.

In the first quarter of 2011, according to research by the Cleantech Group, venture capitalists invested $641 million in 26 deals in U.S. solar companies. MiaSolé, a thin-film panel maker, closed the largest round in that period, $106 million from Kleiner Perkins Caufield & Byers, Firelake Capital and VantagePoint Venture Partners. 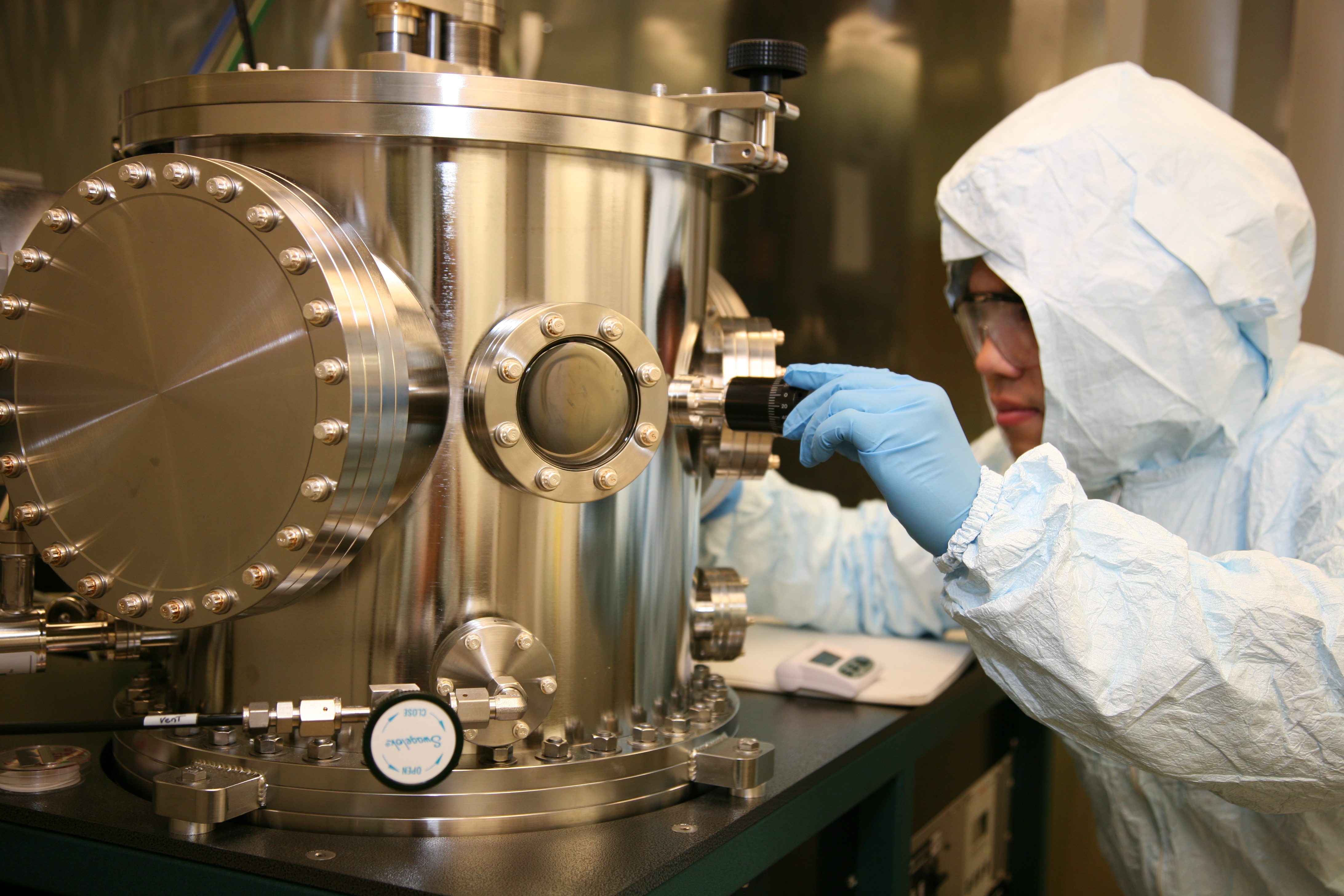 PVMC members will share high-tech facilities and equipment, and academic resources at the U-Albany (in New York, image above) and the University of Central Florida.

Michael Fancher, an associate professor of nano-economics at U-Albany’s College of Nanoscale Science & Engineering, who helped set up the PVMC explained:

“As academic hosts, we help each company pursue and protect their own product development, and work in a collaborative way that lets them recoup part of their overhead.

You could easily have competitors with similar process steps who are making CIGS solar photovoltaics. They’d typically operate within a facility they own. They might have one proprietary tool for one part of their manufacturing process that they’re changing up, and testing out.

With this facility and consortium, if you have to demo how your company’s new process step performs in an integrated process flow, you can put your tool in a [manufacturing] line, then another tool. You run the line on each, then compare the results. One might deposit materials using thermal deposition. Another might use sputtering deposition. You can reconfigure the line to demo these, and see where thing improve. But you don’t have to go out, and build your company its own entire line.”

This concept is nothing new. Years ago, the Austin-founded, now Albany-based SEMATECH did for the chip industry what PVMC aims to do for solar. (Sematech helped fund and form the solar consortium.)

Is this enough to mainstream clean energy?

“Early stage tech development gets more attention from cleantech investors in the U.S. We don’t have enough big money invested in the types of things that really need massive deployment, and are ready for that today. The private sector is not investing nearly enough in clean energy— not even close given the magnitude of the opportunity, and the problem, especially in the last couple of years.

Part of this is because government regulation [favoring renewable energy] isn’t happening, and it isn’t likely to happen this year. We could see a bunch hedge funds that used to pull in millions continue to drop out. What’s going to fill that gap?

Certainly government grants and collaboration can help. In the whole history of cleantech investing, though — and you’ve heard this before— we’ve invested less than a handful of days of Exxon’s revenue. I’d like to see the next half billion spent on deployable technology that can put a dent in our foreign oil dependence, now.”

Element Partners’ investments range within the cleantech sector from a natural gas vehicle technology company, Agility Fuel Systems, to an electric vehicle manufacturer, Think Global AS, from solar and wind businesses (Petra Solar and Wasatch Wind) to companies that help coal and oil businesses generate more energy from existing resources, with lower impact to the environment.

The following organizations have joined the PVMC so far: