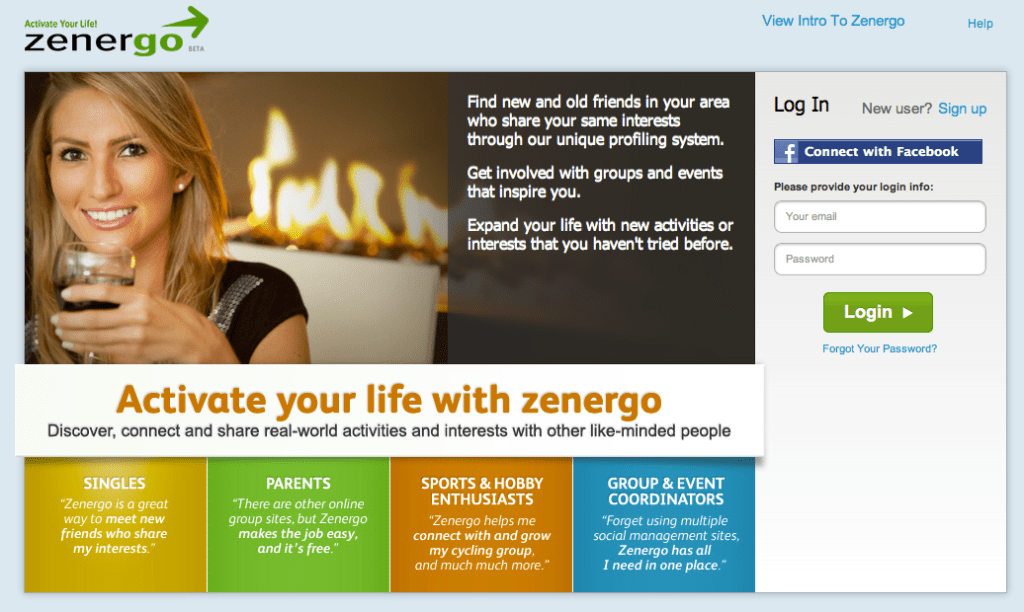 Some of these specialized networks have significant traffic, and while Facebook Groups continues to evolve, it seems that there may still be room for social networks that revolve around shared interests, and specific groups and activities. It’s also true that more and more companies are becoming interested in leveraging online activity and interaction to create meaningful connections, relationships, and services offline. The examples are endless.

It’s for these reasons that Zenergo, an activity-based social network that launches today, still believes there’s room to succeed. Founder and CEO Patrick Ferrell co-founded SocialNet.com (a dating website) with Reid Hoffman, who, as you may know, went on to join PayPal’s founding board of directors and co-found LinkedIn. After SocialNet, Ferrell went on to found GamePro Magazine, which became GamePro Media and was later sold to IDG — as well as several others.

Based on his experience as an entrepreneur, Ferrell told TechCrunch that he continues to come back to the idea that people naturally gravitate toward — and get more value out of — social circles that involve those who share similar activities and interests, and that, at the same time, people are spending more time in their virtual worlds but wish they could take that value into the real world. And that the perfect solution hasn’t yet been found.

So, for the last 2 years, Ferrell and his team have been building an activities-focused social platform that enables people to engage more deeply with their real world hobbies and friends. Their target is wide, as Zenergo hopes to cater not only to those already involved in a sport, hobby, or interest who want to connect with new or existing like-minded people based on location and by experience-level, but busy parents looking for an online organization system — and single people looking for new friends, groups and events that specifically match their lifestyle and social interests.

Zenergo may be over-extending itself by casting its net wide, but the startup hopes to combat this by giving its users access to all the social tools that other networks provide, like photos, invitations, calendars, groups, contact managers and friend finders. All on one website. Yeeha!

One thing that came as music to my ears: Let’s say you’re an avid golfer, and you create a golf group where you’re connecting with new friends over your favorite course, planning tee times and so on, while right next store the bass fishing and Sudoku groups are doing the same thing. You might assume that with all these disparate interest groups in one place, you’d find chaos. And if you’re like me, you want to keep the various circles you create around your hobbies separate and distinct. Zenergo enables this kind of focused interaction — or, if you want to integrate your various interests, you can overlap them as well. And what’s more, Ferrell assures me, Zenergo intends to be a resource for people who want to go out and actually play golf, rather than sit around and yap about Tiger Woods.

So, you can use Zenergo local runner’s group, for example, to post an invitation to a Saturday trail run, or find a tennis partner. Wine aficionados can publicize, organize and expand events. You get the idea.

As for how the site will make money, Ferrell tells me its approach is similar to that of LinkedIn. Initially, it will be ad-supported, but will likely soon begin offering premium benefits and features.

Zenergo also announced a partnership with the Silicon Valley & Monterey Bay Area Chapter of Team In Training, which is using Zenergo to recruit and organize team members. Having raised $1 billon to support blood cancer research and patient services, Team In Training is The Leukemia & Lymphoma Society’s endurance sports charity training program for marathons, half marathons, triathlons, and hiking adventures.

The social network hopes to leverage partnerships with charities and non-profits to attract activists and do-gooders as well, giving them a place to organize events and fundraisers. Obviously, there is plenty of competition in the activist networking space, as there is for each niche category, but by bringing them all together in one place, Zenergo may be onto something big. Or not. You be the judge.