There are a number of barebones/mass-market low-cost devices out there, many of them aimed at the huge developing world market, hoping to outfit people with basic PC functionality for as little cost as possible. The OLPC is among the most famous, but perhaps the most luxurious: with a cutting-edge screen, built-in keyboard and networking, and so on, it has perhaps aimed too high, resulting in (as we’ve seen) increasing price and limited uptake. India’s “$35” tablet comes to mind as well.

David Braben, perhaps best known for developing the revolutionary Elite, is now leading a foundation called Raspberry Pi to mass produce this ultra-minimal PC and distribute it where even an OLPC is too much. Their device is as bare-bones as it gets, and they’re hoping to sell it for $25. 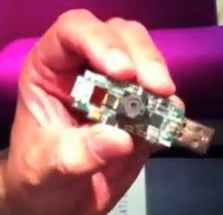 It’s about the size of a USB drive, and comprises a 700MHz ARM11 processor, 128MB of RAM, and ports for video, removable media, and USB 2.0. That’s all! There’s a “general-purpose” I/O slot that can be used to attach peripherals like a camera or wireless module, but that’s really all there is to it. And of course, that’s pretty much all you need to run a modern computer OS.

With a 16GB SD card, a USB hub connecting a mouse and keyboard, and any monitor that connects to composite or HDMI, you’ve got a fully functional PC that probably outperforms desktops from a few years back. It’ll run what you put on it, as long as it’s ARM-compatible — right now it’s shown running Ubuntu 9, but there are a number of options, all offering complete modern web browsing, office tools, printing, maps, and all the other usual suspects.

I suspect this thing is much less junkware than many other low-cost devices, many of which are simply turning around cheap components for a low-margin product. This thing could be bought in bulk and easily distributed, powering internet cafes and schools in impoverished areas, and introducing them to the joys of Linux. Every kid could carry their entire computer around with them on an SD card. Doesn’t that sound right? Personally, I like it better than the OLPC approach, admirable as it is.

The Raspberry Pi team still has to prove it can produce the device for the price they’ve quoted — a task that has choked bigger operations than theirs. But despite being a custom device and PCB, it doesn’t seem unlikely that these off-the-shelf components (plus perhaps a shell) could be gotten for under that.

If you’d like to know more, head over to Raspberry Pi’s similarly bare-bones website, or check out this article at the BBC, where there is a video of Braben showing off the device and explaining his motivation for it.