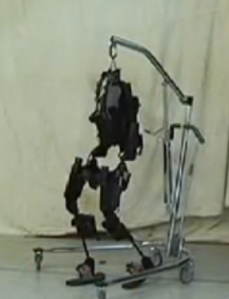 It’s not everyday that one has an encounter with a robot, let alone has the chance to wear one, and recently, I was lucky enough to have just that. Thanks to Berkeley Bionics, I got to take a peak into the future of bionic devices — and get a small taste of what it must feel like to be Anthony Stark (a.k.a. Iron Man).

The Berkeley-based startup is developing exciting new technology that is truly the stuff of comic books and, formerly, of science fiction. Specifically, the company is making wearable, artifi­cially intelligent bionic devices that it calls “exoskeletons”. This has taken shape in two significant forms: eLEGS and HULC. Both of which you can see (as well as an interview with Berkeley Bionics CEO Eythor Bender) in the accompanying video.

In 2008, Berkeley Bionics introduced the appropriately-named HULC (or Human Universal Load Carrier), which is an unteth­ered exoskeleton that augments the user’s strength and endurance. HULC was specifically designed for those on long, strenuous missions (like soldiers) and allows the user to carry up to 200 pounds. For hours. In 2009, Berkeley Bionics and Lockheed Martin established a licensing agreement, which will enable Lockheed to further develop HULC and make it a field-ready device for military use.

Last year, the startup debuted its second exciting (and life-altering) device, called eLEGS, which is a wearable, artificially intelligent exoskeleton that allows people with paralysis to stand up and walk again. The startup hopes that this technology can eventually eliminate the need for wheelchairs, giving millions of people suffering from spinal cord injuries, stroke, MS, and more a new lease on life.

Below you’ll find an interview with the Berkeley Bionics CEO, in which he walks through the company’s history and development of the technology behind the devices. You’ll also get a glimpse of eLEGS in action as well as the pleasure of seeing me gracefully trying out, and becoming, the HULC. The second video contains the full interview. Uncut.

And, as a bonus, because we thought this was such a cool story and wanted to dive in a bit more, tomorrow we’ll be taking you to the Valley Medical Center in San Jose, where eLEGS is being used and developed as part of patient rehabilitation at Silicon Valley’s premiere hospital. I got a chance to speak with Dr. Akshat Shah, Chief of Spinal Cord & Orthopedic Rehabilitation, as well as VMC Foundation Executive Director Chris Wilder, and to see eLEGS in action. In the field. So stay tuned.