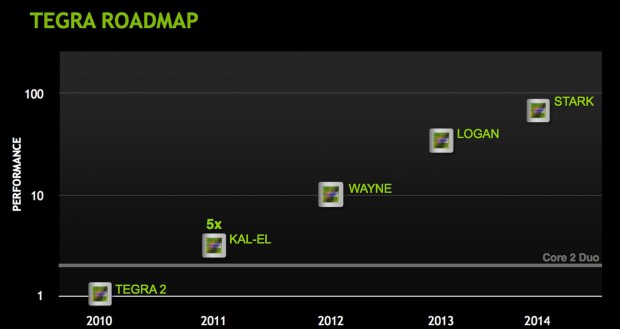 Hope your radiation insurance is up to date. Asus is reportedly working on a tablet powered by the Nvidia Tegra 3, a quad-core platform that aims to kill frame rates and sperm counts at equal rates. Digitimes makes mention of the upcoming super tablet but fails when it comes to the details. In fact the report is silly light on specifics. Simply saying that Asus will launch a tablet with Nvidia’s next-gen platform is like saying Apple will launch the iPad 3 or that the sun will burn out. Yes, things we all know. In fact there are probably a few manufacturers working on a Tegra 3 tablet right now. The report also mentions that Asus will sell another tablet powered by an Intel chip. Again, anyone surprised?

Tegra 3 will bring relalitvely crazy power to the slate form factor. Project codename Kal-El has 5x as power as Tegra 2 with 3x faster graphics and capable of 2560×1600 resolution. This is done through a quad-core Cortex-A9 CPU and should make today’s tablets look like drugstore electronics. Of course with great power comes great battery responsibility so hopefully there are equally awesome power sources under development as well. But don’t get too excited! Tegra 4 will be 10x faster than Tegra 2 and set to come out next year.