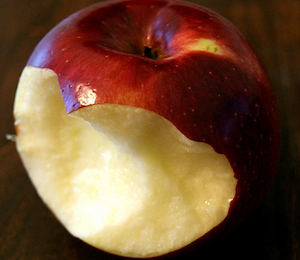 A couple months ago, we noted that a company called 955 Dreams was playing the iPad like jazz with their hot app, The History of Jazz. Now they’re back again with another musically-themed iPad app. And it’s far out, man.

On The Way To Woodstock takes everything that 955 Dreams learned from the jazz app and expands upon it. I had a chance to sit down with the team a few days ago and play around with the app. It’s beautiful, fun, and engaging. And much like The History of Jazz, I suspect it’s exactly the type of app Apple likes seeing pop up from developers to showcase their device.

Users who got a chance to use The History of Jazz should immediately feel right at home with On The Way To Woodstock, as the look and feel remains largely the same. But 955 Dreams has blown the doors off this new app when it comes to content. Specifically, while Jazz had a robust 55 hours or so of consumable content, Woodstock has roughly 100 hours, co-founder Kiran Bellubbi says.

And the new app includes a lot of editorial work. It’s basically “a book designed and created for the iPad,” Bellubbi notes. It tells the story of Woodstock ranging from the 1950s (to set the political and social stage leading up to Woodstock) to the aftermath. The meat, of course, are the days of the festival itself which can be traversed in a truly immersive experience complete with videos and music.

But the real key may be the photography included in the app. 955 Dreams worked with one photographer to get all of his best shots into the app, head of design TJ Zark notes. This includes a lot of photos that most people have never seen from Woodstock. And there are some amazing shots as the photographer was on the team that helped shoot the official documentary about the show — meaning he had access to a helicopter. 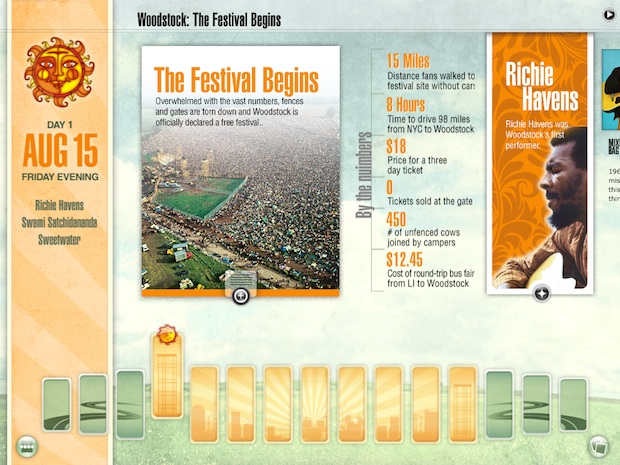 The app, which has just gone live in the App Store will be available for a limited time at $6.99. After that, it will raise to the standard $9.99 price point that 955 Dreams likes to sell their apps at. And the pricing has worked well for them. They’ve been pulling in significant revenues since day one, they tell us.

Of course, this revenue stream has been helped by the fact that Apple has featured Jazz a few times. And in fact, Apple selected the app to be included in the App Store “Hall of Fame” — they’re one of just 45 or so app to get this distinction out of the hundreds of thousands apps in the App Store.

But that’s what happens when you make an app that seems perfect for the platform. And it also shows some big potential for the future of other content on these devices, like music. Bellubbi notes that more people are consuming music today than ever before, but they’re just not buying as much of it. Apps like Jazz and Woodstock hope to serve as a platform to get people back to investing in music.

While they wouldn’t give actual numbers for how much music they sold through Jazz (each song has an iTunes preview button and link to buy the song), they note that sales have been very good. And they suspect they’ll be even better through the Woodstock app.

And that speaks to where 955 Dreams is looking next. Music discovery is what interests them the most right now. And these first two apps just scratch the surface in a very packaged way, they note. In other words, expect even more coming out of these guys in the coming months.

For now, enjoy On The Way To Woodstock here and The History of Jazz here. 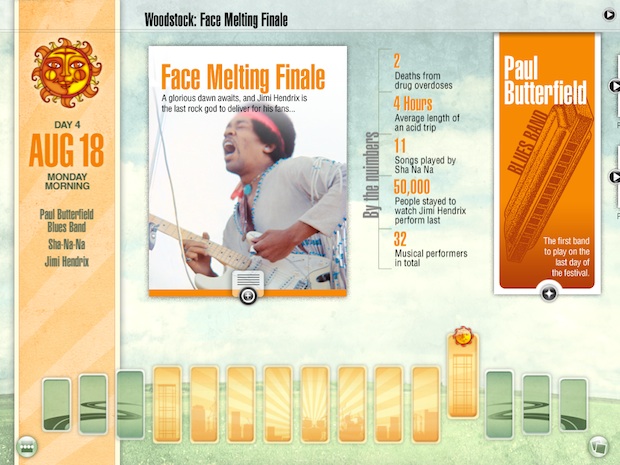 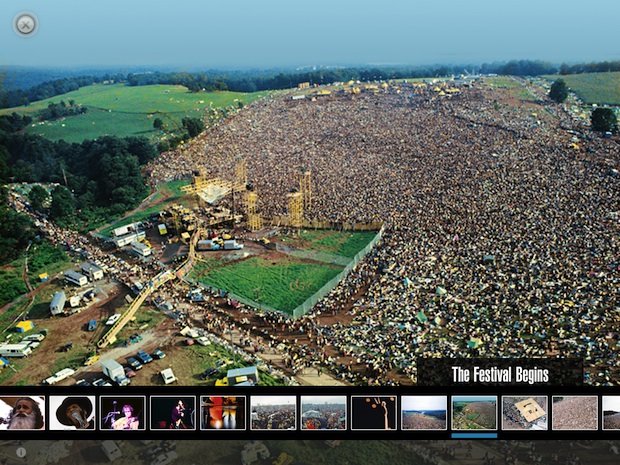 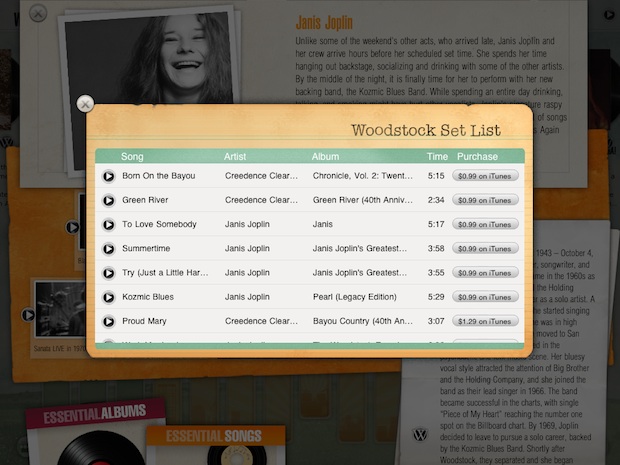