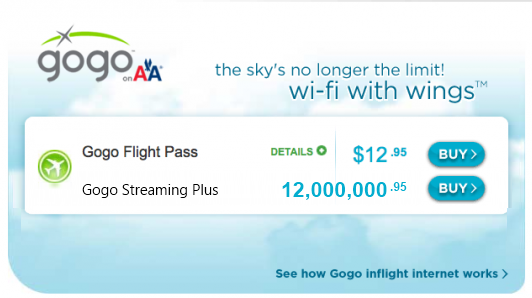 It seems like it was just yesterday that the major airlines were finally dragged kicking and screaming into offering in-flight wi-fi. But now that it’s just another feature of flying, they’re going to be scrambling to differentiate or at least agree on what seems reasonable to offer. American is leading the pack this time, or so it says, by being the first to test streaming video services.

I’m not sure how much water that claim will hold. After all, anyone who has wi-fi access can reach a dozen streaming video sites — YouTube, Vimeo, etc. But perhaps American means something a little more institutional, and perhaps purpose-built.

The trouble might be bandwidth at that point. If their satellite connection can handle, say, 10Mbps down, that’s probably no more than 10 SD movies playing at one time, and even that’s stretching it. The real numbers may be higher, or lower, but I don’t get the impression we’re looking at any gigabit connections up there just yet.

And then there’s the money thing. I expect there will be something like the above.

Update: GoGo has contacted me to clarify that the streaming service is actually going to use on-plane storage. Makes more sense, but it’s not much different from the in-flight entertainment systems on most planes today. Nicer screen, though, that’s for sure. They also note that the total bandwidth is more like 3Mbps (using EVDO rev A), so streaming over that would be pretty much impossible.

Whatever the case, American also announced that it plans to have installed wi-fi on every single one of its domestic planes by the end of next year.