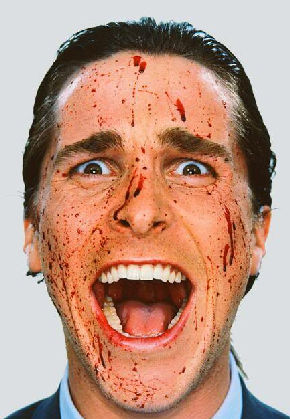 That was Microsoft’s statement about the Online Services Division in their earnings release yesterday. Growth! Yippee! The strategy is working! Right?

What they don’t bother to mention in the release, but they can’t hide in the actual numbers, is just how bad the quarter actually was for the division. While revenue may have grown a bit year over year, income — as in the money you actually get to keep — was an entirely different story. It was a bloodbath, really. Yes, again.

Microsoft lost $726 million in the Online Services Division for the quarter. It was actually their worst quarter in two years in that regard. And it was their second worst ever, as Business Insider points out in their nifty chart perfect for showing such bloodbaths.

And despite the year over year revenue growth, the income was actually down year over year. As in, they managed to lose more money despite bringing in more. As in, the statement up top is total misdirection bullshit.

And how’s this for a kick in the pants: if Microsoft had just scrapped their Online Services Division for the quarter, they likely would have beaten Apple in terms of profits once again. Instead, they’re over $700 million behind — behind, mind you, for the first time in a couple decades.

Of course, Microsoft can’t afford to scrap the Online Services Division (well, figuratively afford it, at least). Like every technology company, they know this is the key to the future. And that’s precisely why they’re dumping so much money into it.

But it that strategy actually working? Revenue is growing, but losses are mounting. Microsoft is having to spend $2 to make $1 — actually a bit worse than that ratio!

Last October, I wrote that Microsoft was running basically the worst Internet startup ever. This pissed a lot of people off, who thought the comparison was unfair. After all, Microsoft can afford to burn the money.

That’s true, the quarter overall was fairly good for them (though the stock took a nosedive today because it wasn’t good enough). But if the two pillars of their business, Windows and Office, start to slip (as just about everyone believes they will sooner or later as we move into an increasingly mobile world of computing), these Online Services losses are going to become a big, big problem. Fast.

Maybe Microsoft can figure it out before that happens. But there’s just absolutely no data pointing in that direction right now. And there hasn’t been in the past six years. In fact, the numbers are actually getting worse!

After a nightmare Q3 and Q4 in 2010 (fiscal, not the actual calendar quarters) with Online Services loses right around $700 million, it looked like Microsoft may be turning things around with loses of “only” around $550 million in Q1 and Q2 of 2011. But if you look at the bigger picture, you’ll see that those Q1 and Q2 loses were actually worse year over year. If you simply extrapolated that out, you should have been able to predict this quarter’s bloodbath as well.

In the past year, Microsoft has now lost a staggering $2.5 billion in the Online Services Division. Think about that for a second. When I wrote the October post, the loss runrate was “only” $2 billion. The situation is getting worse.

And so I ask, how long can this bloodbath last? When will it end? Or maybe more to the point: will it end? All the data we have right now points to a pretty definitive “no”. 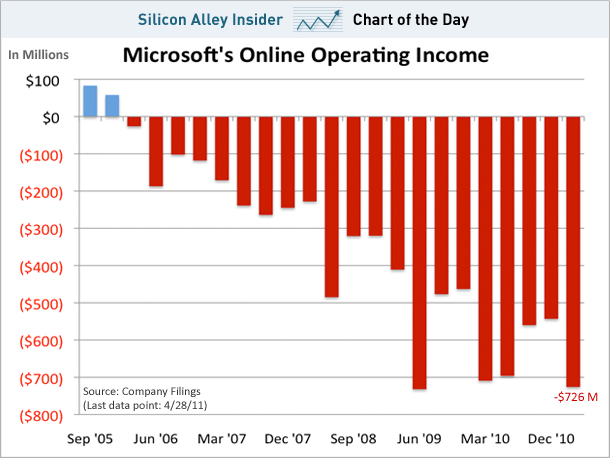