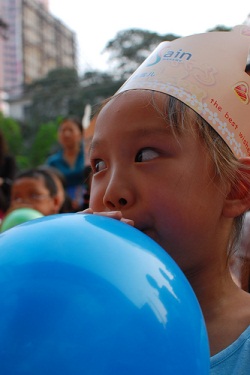 According to research firm IDC, the global mobile phone market ballooned in the first quarter of this year, growing 19.8 percent year-over-year, mostly due to the meteoric rise of smartphone shipments, especially in emerging markets. According to the firm’s Worldwide Mobile Phone Tracker, vendors shipped 371.8 million units in Q1 2011 compared to 310.5 million units in the first quarter of 2010.

IDC posits that smartphone growth worldwide, particularly in Asia/Pacific (excluding Japan, due to the impact of the earthquake and tsunami), Middle East, Africa and Latin America, helped lift the overall market to a record first-quarter high.

Feature phones still represent the majority of mobile phone shipments, even though they are under increasing pressure from smartphones, but IDC says it does not expect feature phones to disappear quickly as there is still strong demand across the globe.

In the United States, Apple’s iPhone and HTC Thunderbolt were two devices (introduced at Verizon Wireless) that helped keep the smartphone category front and center of the overall mobile phone market last quarter. BlackBerry, iPhone, and Android devices were best sellers, says IDC, and the same trend is visible in Canada.

In Western Europe, Android-based phones and iPhones helped grow the market in the seasonally slow quarter. New devices from HTC, Samsung, and Sony Ericsson sold well in most countries in the high-end tiers.

Apple maintained its number 4 spot on IDC’s Top 5 list (see below) thanks to a record quarter for unit shipments. The company also posted the highest growth rate of the worldwide leaders, with market share rising to 5 percent. 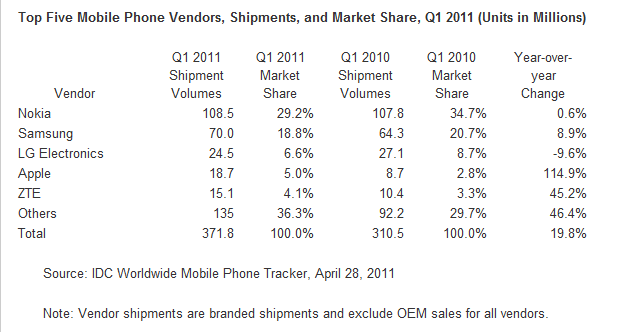