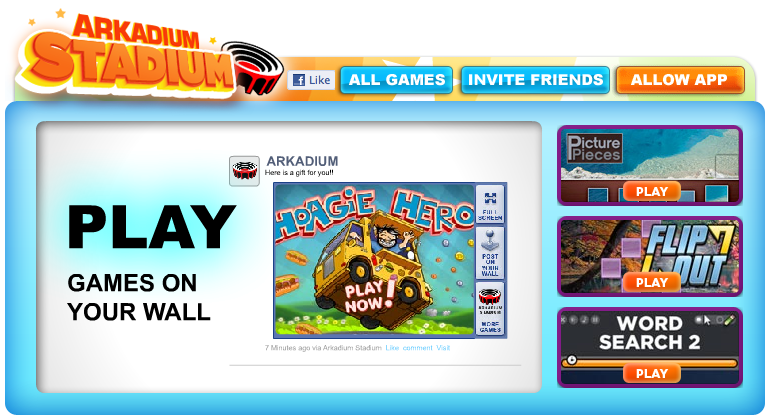 Arkadium, the casual and social game developer, is announcing today the release of the Arkadium Stadium, a suite of 12 Flash-based games that users can post and play right from their Facebook walls. Now you don’t have to deal with the hassle of playing the game in-app. I joke, but this functionality is very cool, as it allows you to quickly publish the game app to your profile, or your friends’ profiles and play right there. No fuss, no muss.

Arkadium Co-founder and President Jessica Rovello told me that few gaming companies have yet explored this method of “wall play”, so through the Arkadium Stadium, the company hopes to begin setting the groundwork for people to be able to enjoy and share games like they would videos, photos, and links.

Arkadium has been making casual games for the last 10 years, but has only moved into creating games for Facebook in the last year. With the growth in popularity of Facebook games (back in September Zuckerberg said that 200 million people are playing games on Facebook), the company’s transition made sense, Rovello said. And, while most Facebook games are currently played in-app, this functionality might signal a growing trend in social gaming, especially on Facebook. It’s a logical next-step, and will only make sharing and playing that much easier.

The Arkadium games suite, which includes puzzles like Sudoku, a Tetris-like dice game, 52-card pickup, and other simple (and addicting), casual games. In fact, in writing this post, I was distracted at least once by the ability to post a game to my Facebook profile, play the game embedded-as-is in my wall, then pause and stalk a few ex-girlfriends.

I have a feeling this functionality is only going to increase the potential of virality, which is of course exactly what Arkadium is hoping. Of course, if you’re not a fan or are a little sensitive to multimedia Wall posts, this is a great way to be bombarded by game-spam at any turn on Facebook. Though I think people are starting to let down their guard a little bit in terms of how willing they are to have content shared on their walls. And, hey, if it gets annoying, you can just remove the post, or play the game in-app.

Whether or not it’s needed, this adds another layer to “Social”, considering I can now pop over to friends’ profiles to see if anyone else has taken the bait and is enjoying a little Sudoku during work hours. And if they’ve posted a game I happen to enjoy, but am a little hesitant to add the game to my own wall (I’m careful like that), then I can just roll a few dice right on their Facebook wall. Then leave them a message on their wall reminding them how much better I am at the game.

At any rate, it’s kind of a neat feature, and I’ll be interested to see whether or not its embraced by fellow Facebook gamers. (And how well Flash holds up across browsers — in Chrome, it works like a charm.) I have a feeling it will be, if Zynga isn’t already planning to roll out similar functionality for their lineup.