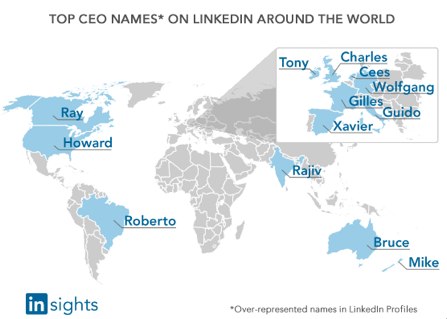 LinkedIn contrasted CEOs with the average LinkedIn professional to find the top names that are over-represented among CEOs. The top CEO names found on the network, in order, are: Peter, Bob, Jack, Bruce, Fred, Deborah, Sally, Debra, Cynthia, and Carolyn. One trend LinkedIn highlights is that the most over-indexed CEO names for males tend to be either short or shortened versions of popular first names. Female CEOs, on the other hand, use their full name to project a more professional image, reports the network.

In terms of name length by industry, short, four-letter names are even more popular in sales (Chip, Trey, Todd) but not in engineering (Rajesh, Jeremy, Andrew) or the restaurant industry, where the top over-represented names are Thierry, Philippe and Laurent.

By country, Howard took the top CEO name in the U.S., Ray won in Canada, Charles for the U.K., Tony for Ireland, Gilles for France, Wolfgang for Germany, Guido for Italy, Xavier for Spain, Rajiv for India, Mike for New Zealand, Bruce for Australia and Roberto for Brazil.

Of course, it’s important to note that these names correlate with members who indicated they are CEO positions at companies around the world on their LinkedIn profiles.