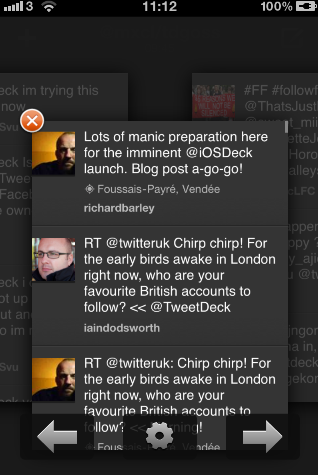 Tweetdeck has release a new version 2.0 of its app for the iPhone. They are calling it a Hollywood-esque “re-imagining” where the essence of the original remains but is brought up to date. It’s taken “several months of feverish work”.

Improved features include swiping between columns, navigation through user profiles and the ability to add columns as well as ‘Pull to Update’ and Follow/Unfollow sliders tweaks.

A pinch gesture on a column accesses options to add any combination of feeds into a column so that Twitter timelines, Mentions, DMs Favourites, Lists, Searches, Facebook feeds can be blended into a personalised column.