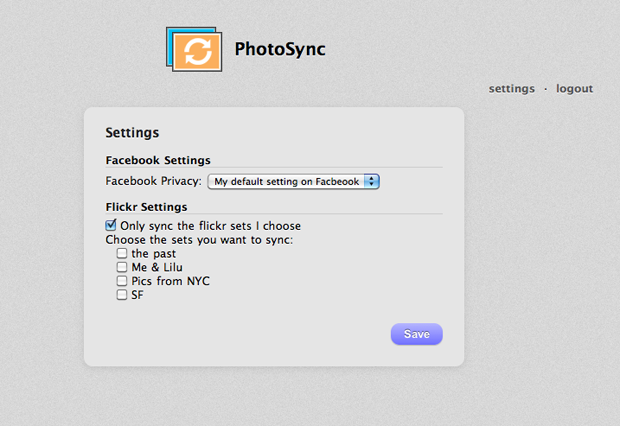 Yes I know that Flickr offers a dinky Facebook Newsfeed sync and there are plenty of other services that offer pretty complex Flickr photo-syncing tools, but this post is for the three of you that want to prevent this from happening to you and don’t have 20 minutes to spend figuring it out.

My attempts to sync my Flickr photos to Facebook manually through Facebook Activity Updates are still loading so I’m just going use that time to write about a faster and more effective way to do this.

Created by Paul Carduner, PhotoSync allows you to sync all or a few of your Flickr albums to Facebook and doesn’t take an eternity. The service partions large versions of your Flickr photos and albums into matching Facebook albums and keeps syncing both accounts every hour, with no effort on your part.

Unfortunately PhotoSync doesn’t import the Flickr Pro photo hostages, but for that TechCrunch reader Gaurav Sharma has a work around:

Simply search “http://www.google.com/search?sourceid=chrome&ie=UTF-8&q=site%3Aflickr.com+inurl%3Aphotos%2Fmichaelarrington%2F(*)%2F” with your Flickr user name instead of “michaelarrington” and Google will show you photos beyond your 200 Flickr Pro limit. Building a Google scraper or having access to the Google Custom Search API will allow to download your photos.

So there you go.