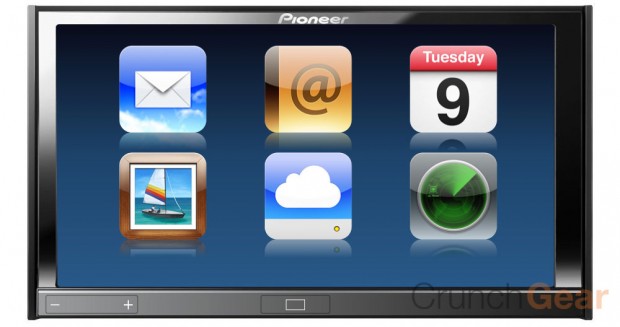 Pioneer is about ready to launch a car audio head unit that features an GUI remarkable similar to iOS, complete with apps, iTunes, and iPhone connectivity.

Meet the Pioneer AppRadio, model number SPH-DA01. This unannounced double-din head unit hit the FCC database yesterday and a tipster wrote in to answer many of our questions. Obviously, given the name, this is a radio designed around iPhone and iPod. The UI features homescreens, each with two rows of three app icons each. (like the mock-up shows) We hear it feels “exactly like the iOS experience” but since it doesn’t actually run iOS we’re mighty curious how the AppRadio will sit with Apple corporate.

iOS 4.1 devices (read: no Android or WinMo devices) connect to the AppRadio through a traditional USB Dock Connector cable and feeds the deck the phone’s contacts and music. Streaming apps are part of the system as our tipster saw live demos of Pandora and iHeartRadio and also mentions that social media apps are going to be part of the system. Although not specifically mentioned by our tipster, the iPhone must also provide the internet data stream as the FCC docs doesn’t mention any wireless radios. 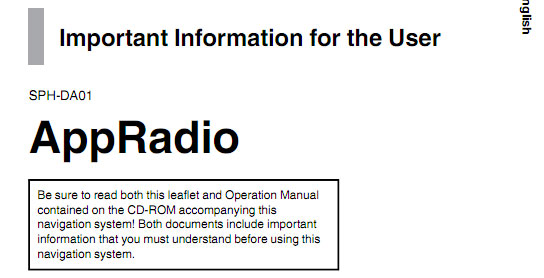 The hardware looks a lot like an Apple device with a home button mounted under a glossy multitouch, capacitive 6.1-inch screen with a volume rocker mounted on the driver’s side. The Dock Connector cable plugs into a USB port on a rear-connecting cable adapter that also features an S-Video and RCA jack. There’s even an optional steering wheel-mounted control unit for controlling media playback.

The Pioneer head unit seems to feature most standard radio functions besides an optical drive. There is, however, a microsSD card slot, Bluetooth connectivity, AM/FM, GPS, and the ability to hook up a rear view camera. Satellite and HD radio were not mentioned but it seems unlikely given their standard nature this unit will launch without at least one — unless keeping the price low is paramount.

We hear that users will be able to add different apps on the radio, but not the exact process involved. It will likely be done through a microSD card, although a Pioneer iOS app could also serve up the apps as long as Apple approves. 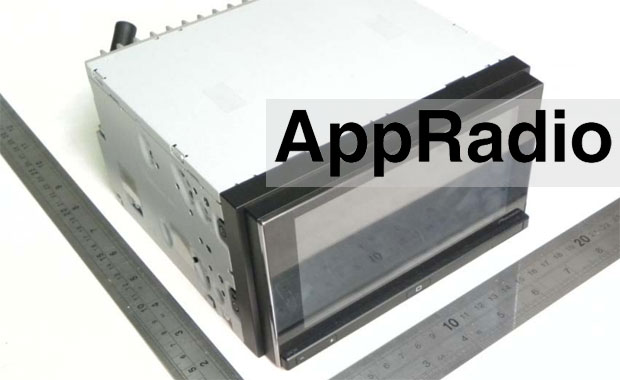 Pioneer demoed PAIS, Platform for the Aggregation of Internet Services, at CES 2011. That system is designed to allow consumers to share data and internet connection across multiple devices, regardless of manufacturer. It’s a novel platform, but doesn’t seem to be in use here. The AppRadio lacks any sort of 802.11x radio and uses a 500Mhz NetLogic Microsystem Au1210 CPU, where PAIS is designed around the Intel Atom. Besides, the AppRadio doesn’t fit the description of different platforms talking together. This is all about iOS here.

Pioneer is clearly trying something new here with the fresh interface and lack of optical drive. If priced right, the AppRadio might be the savior of the dying aftermarket audio market. Companies like Pioneer, Kenwood, and Alpine all know how to make killer hardware, but the software is often horrible. Taking iOS’ styling cues and navigation paths sounds like lawsuit bait, but at least the deck will be pretty.

[special thanks to Bryce, our graphical ninja for the mockup]