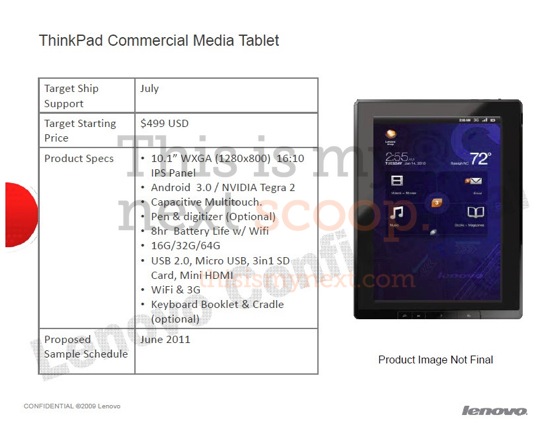 It was only a matter of time until Lenovo broke into the Honeycomb party. The company’s upcoming Tegra 2 tablet is reportedly set to hit this June with an iPad-ish WiFi/3G and storage pricing scheme starting with a 16GB WiFi-only model. Not that exciting, right? You’re probably saying it’s more of the same ol’ Android nonsense.

Lenovo’s offering is set to come with a keyboard docking station and a custom interface dubbed Lenovo Family UI. Plus, the tablet sports an IPS screen, a 3-in-1 SD card slot, and supports a pen and digitizer. Both the keyboard “booklet” and pen are optional according to the PowerPoint obtained by ThisIsMyNext so the total package price could be well above competitors.

In a few ways this tablet is just more of the same. Lenovo however excels at modern industry design and this tablet will likely challenge even the iPad in build quality. You know the keyboard will be one of the best available because that’s just how Lenovo rolls. ThisIsMyNext notes that the slides are a few months old so things are likely to change. It wouldn’t be that surprising to see this tablet hit the retail market at the now seemingly standard $449 Android tablet price point, both undercutting the iPad and keeping pace with the rest of the Honeycomb slates. Guess we’ll have to wait until June — or sooner thanks to leaks.