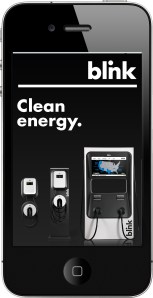 How many apps does it take to recharge a vehicle? Apparently, one is not enough. Several companies offering mobile apps to drivers — to help them find a place to charge up or refuel in an environmentally sustainable way — made product and milestone announcements around Earth Day. Here’s the run down.

ECOtality (NASDAQ: ECTY) — a San Francisco company that’s building electric vehicle (EV) technology and infrastructure in the U.S. and China— unveiled its Blink Network mobile app (screenshot, above) to help users find and reserve a nearby, available charging station at the Electric Drive Transportation Association conference in Washington D.C. Reservation and status-update features made ECOtality’s app distinct from other charger-finders for about a minute.

On Monday, however, Coulomb Technologies announced an upgrade to the ChargePoint app, including similar functionality. ECOtality’s app will be available for English-language users of iOS and Android devices in the next few weeks via BlinkNetwork.com, while Coulomb’s ChargePoint app is available now.

Both companies map the charging stations within the networks that they install, own and operate on behalf of their customers. Both companies supply stations and software to: companies with large vehicle fleets; employers that want to offer EV charging at work; retail store and garage owners; homeowners; and municipalities or utilities.

Several other web and mobile charging station finders, however, map any and all charging stations — which could make more sense for cross-country drivers. One such app is provided by the U.S. Department of Energy’s National Renewable Energy Laboratory, the Alternative Fueling Station Locator. The app uses Google Maps technology to show the location of publicly accessible EV charging stations, clean vehicle equipment suppliers, and biodiesel, hydrogen and other alternative fueling stations.

The open source site CarStations.com, which is expected to spin out a mobile product this year, includes user-contributed data a la Wikipedia to show charging and clean fuel stations.

A newer entrant, the PlugShare app by Xatori (images, below) maps publicly accessible charging stations, along with volunteer homes or businesses that are willing to share their outlets with EV and hybrid-plugin drivers.

PlugShare today claimed that its users comprise the “largest consumer electric vehicle charging network” in the United States. According to company reports, about 1,500 outlets have been shared under the PlugShare collaborative consumption model to-date, across 48 states in the U.S. The app has 13,000 some users so far.

Xatori chief technology officer*, Armen Petrosian, said that PlugShare is functioning as a kind of social network, and discussed features the company plans to add to it:

We are seeing two main types of communication occurring in the [PlugShare] network. One type of communication occurs between members who have shared outlets 10 to 100 miles apart…and are making a request to charge when one member is away from home. Users who are 5 miles apart or less— [sometimes want] to chat with a like-minded individual. I’ve experienced this first-hand as several members in my neighborhood have contacted me just to say hello, see if I have an EV, etc.

There are a number of features that we hope to add [to PlugShare] but a couple stand out right now. One is a reputation system so users can rate charging locations (private and public) and add comments. The second is a way to add or edit public charging station information, so that it can be kept up-to-date by the community.

Xatori has not yet determined how the open data and volunteer-inspiring app will generate revenue. The company is focused on building a large user base, first.

Meanwhile, Coulomb’s ChargePoint app helps the company generate fees from mobile payments— fifty cents per transaction, plus 7.5% of whatever the station-owner adds as a transactional fee for drivers.

A veteran engineer and advocate for clean vehicles, Kristen Helsel, vice president of EV Solutions at Aerovironment, believes that apps of the greatest use to electric vehicle drivers, and the industry, should present data about charging stations agnostically. Aerovironment’s own EV charger technology is sold on a “white label” basis, and is included in a number of other brands’ stations and networks. Helsel explained her position further:

“At Aerovironment, we work to enable all of the mapping services to have the most up to date information about where we install public charging stations. We don’t expect customers just to rely on us. What’s really important is that the information is available, and that drivers experience confidence when they want to access EV infrastructure.

It will be just as important in the future to make data available about all renewables; where are the chargers that are powered by wind or solar, where are the biofuel stations? The networks can go up, and can be limited. But we have to have open architecture in terms of the data.”

“Home grown apps are great. They don’t offer features, and real-time data like we can. We offer [back-end] support with billing and asset management that tells you which stations are working and not, lets our customers [who purchase Coulomb’s charging stations] set pricing and more. We have phone support for drivers; if someone is having trouble charging, they don’t go into the store, or to the receptionist, they call our 1-800 number.

As long as we need to offer our own app to show off all of the benefits and features of our network, we will add to and offer it as a standalone. We do have an open API and offer data to everyone who wants it, PlugShare, TomTom, NREL or anyone. We are not trying to stifle any of them, in fact it’s quite the opposite.”

ECOTality’s president and chief executive officer, Jonathan R. Read, believes there is value in providing an app that’s brand-specific, as well. In an interview with TechCrunch he said:

“I take my hat off to the community service providers, I really do. There’s sort of a brotherhood in the industry. I think that for this EV movement and charge infrastructure to succeed, though, it has to be commercially viable. We cannot rely on good will and trust, or government completely.

We need to make sure that EVs and charge infrastructure can stand alone, make money, be profitable so [clean energy] can proliferate with or without subsidies and volunteers.

I think the task of building EV infrastructure in the U.S. will be somewhat like the early stages of the cell phone business. We look to create the largest network, and provide the greatest depth of service through our apps. We’ve built the Blink Network app to be a part of an overall system that will eventually include not just the ability to make reservations, but also to make payments, use home energy management programs and devices on the go, experience connectivity and access a network of hundreds of thousands of charging stations.”

ECOtality — with the help of a recovery act grant from the DOE — is set to install approximately 5,700 commercial charging stations in the U.S. by the end of this year.

Correction*: In my original draft of this post, I wrote that Armen Petrosian was a chief executive officer of Xatori. He is chief technology officer. Forrest North is founder and CEO of Xatori, Inc. Sorry Forrest!