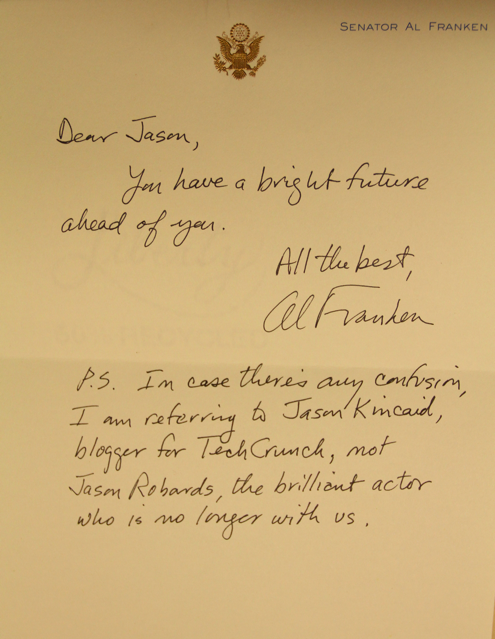 As if my ego needed another boost.

Last month at SXSW, I had the opportunity to interview Senator Al Franken, who was speaking at the conference to discuss the importance of Net Neutrality. The interview went well (I doubt you can tell he was my first Senator), and as I walked out of the room Senator Franken slapped me on the back and said I had a bright future ahead of me.

Instead of responding with one of my famed witticisms I mumbled something about keeping my fingers crossed and went on my way, only to begin cursing myself a few moments later. One of the most level-headed members of the United States Senate had just complimented me — and I had failed to ask for it in writing. Bright future, indeed.

A week later I sent an email to Franken’s staff thanking them for helping to arrange the interview. I may have  mentioned that getting the compliment in writing would be nice, but I included a winky face to indicate that I was joking.

But it seems the members of Senator Franken’s staff could see past the winky face into my heart of hearts. Three weeks later, something special arrived at TechCrunch HQ. You’ll find it above. Can’t miss it.

So thank you, Senator Franken. I can only hope to become half the man Jason Robards was. In the mean time, you’re looking at my new resume above.

And here’s the interview for those of you who missed it.