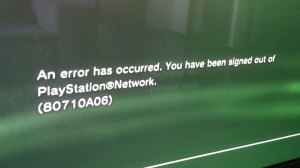 Sony’s PlayStation Network, its online service for PlayStation 3 and PlayStation Portable consoles, suffered from a major outage today, which remains ongoing. According to Sony’s blog, the interruption in service may last into the long weekend — for at least another “full day or two”. The Sony Network currently has more than 70 million registered users, many of whom have taken to Twitter and other social networks to express their frustration over the prolonged downtime. Millions of unhappy gamers (and Netflix customers) a PlayStation outage makes.

Not to mention, the outage comes on the same day that Amazon’s cloud-based web services crashed, taking Reddit, Foursquare, and Quora (among others) with them. Unfortunately, it seems that today has become a fairly drastic example of the vulnerability of the cloud and the extent to which these outages can effect business-as-usual on the Web.

But, as per Sony’s downtime: At this point, the network has been out of commission for over 20 hours, and it has been 16 hours since Sony last posted updates to its blog or Twitter account. So, the root cause of the problem remains unclear. So far, the only update Sony has blasted out to its users is this message: “While we are investigating the cause of the Network outage, we wanted to alert you that it may be a full day or two before we’re able to get the service completely back up and running. Thank you very much for your patience while we work to resolve this matter. Please stay tuned to this space for more details, and we’ll update you again as soon as we can”.

The acknowledgement that there is indeed a widespread problem is admirable, but the company’s vague handling of public relations leaves something to be desired. Especially considering the fact that, several hours before, Sony released a statement through its EU blog, saying that the network outage may be a result of “targeted behaviour by an outside party”, bringing the possibility of cyberattacks into play. Adding to the confusion is the fact that the message has since been removed.

This message, along with the lack of updates or details regarding the outage has led to speculation across the Web that this was potentially the result of attacks by the infamous hacker consortium, Anonymous. Earlier this month, the “hactivist” group launched what it called “Operation: Sony”, in which it employed Denial of Service attacks to take down the parts of the PlayStation Network. The move was hotly debated within Anonymous and was met with criticism from gamers, because it marked the first time the group didn’t simply attack an organization’s main site — and because the coup had a very real effect on consumers — the very people Anonymous claims to support.

Since then, Anonymous has called for a near-term “cease fire” in relation to the PlayStation Network, and it has largely kept its word. In response to today’s outage, the group maintained its innocence on its Facebook page.

The Examiner.com reported that Anonymous’ original beef with the company began “with Sony’s court case against George Hotz, which has since been settled out of court”. Sony sued Hotz for jailbreaking the PS3 and posting the videos of his hack and links to the third party software on YouTube. This led to the creation of “Operation: Sony”. However, in relation to today’s network outage, Anonymous has not yet officially denied responsibility for the attack, nor has it taken credit for it.

Thus, it could be the case that members within Anonymous acted without consent from the majority, and therefore the band of hackers does not wish to take responsibility. Or, on the other hand, a more likely explanation is that Sony is taking advantage of Anonymous’ previous ill-will towards the company to distract users from the fact that the outage is actually an internal problem with the company’s servers. 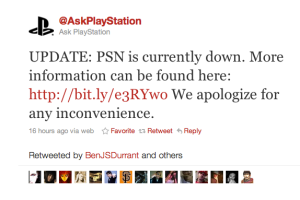 Whatever the cause, there’s no doubt the outage has been a disaster in the making for Sony. Its Network has experienced several outages in recent weeks, which has become a cause for concern among the company’s faithful. And, what’s more, today’s outage is already far more widespread (and of a much longer duration) than its previous hiccups.

Sony may not be aware of the exact problem (maybe it’s a glitch in an update or Steam integration issues), but as we near 24 hours of a global outage that affects millions of people, you’d think the company would at least be able to determine if the problem were due to internal or external factors. Being more open about these things, even though it might involve enduring a black eye, would be smart for public relations — and good for business.

We will update as we learn more. Stay tuned.

UPDATE: First reports of the PlayStation Network outage started trickling in early Thursday morning. As of 6pm Friday, the Network has now been down for over 36 hours. Sony has not as of yet indicated what might be the cause of the outage, and Sony representatives have not responded to messages left seeking comment. The PlayStation Network blog has not been updated since yesterday afternoon, and it has been 24 hours since @PlayStation, @AskPlayStation, or @Sony updated their Twitter streams. @Playstation has nearly 800K followers. @PlayStationEU has at least offered updates, the most recent one coming 5 hours ago, saying they have no new updates and do not yet know the cause.

I think most people will live, even if they have to go 3 days without playing their PS3s. But, from a publicity standpoint, from a trust-in-Sony’s-hardware standpoint, this is a huge FAIL. I don’t want to overdo the importance of social networking, but a third of the way through 2011, not updating a Twitter account that has 800K followers for 30+ hours is absolutely unacceptable.