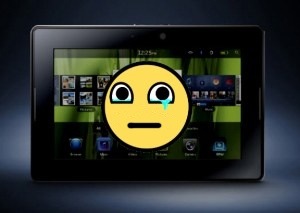 With launch reviews that rivaled Spider-man: Turn Off The Dark, the Playbook didn’t seem to get any breaks. However, depending on if you’re a “glass half full” kind of person, the company did sell about 50,000 Playbooks on opening day, arguably a fairly strong showing for a device that was not initially well-received.

According to an analyst’s report, the Playbook sold an estimated 25,000 units in pre-order and then 20,000 units in stores. This is considerably worse than the iPad’s 300,000 sold on opening day last year but considerably better than any other Android tablet including the Samsung GalTab.

“While the launch of the Playbook is not attracting overnight crowds, pre-order sales and in-store demand in major cities has been solid; however, AT&T’s prohibition of free tethering is an unexpected negative.”

Slow and steady wins the race, I suppose.