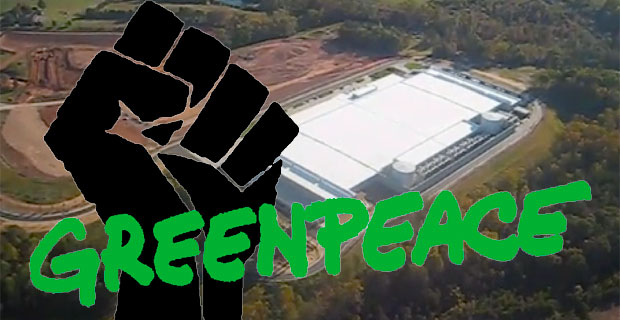 Greenpeace just released its latest snapshot of major corporation’s impact on the planet with IT data centers the main target. The 35 page report [PDF link] details just how much energy is required to run the massive centers powering the so-called cloud. It’s huge according to Greenpeace, consuming 1.5%-2% of the world’s total power consumption and growing at a rate of 12% a year. Somewhat surprisingly Greenpeace sort of applauds the virtues of living in a massive data cloud, pointing to the advent of the smart grid and increased amount telecommuting. Even digital streaming music gets props for having a smaller carbon footprint than physical media.

But this is Greenpeace and so there has to be some finger pointing and letter grading. The main purpose of this report is to reveal top company’s impact on the environment by mainly examining their dependency on fossil and nuclear fuels rather than using renewable sources. However, even Greenpeace notes that these numbers might not be exact since they were calculated without all the facts. Simply put, these ten companies didn’t divulge this info; Greenpeace pieced together their data. It’s a bit dirty itself, actually. 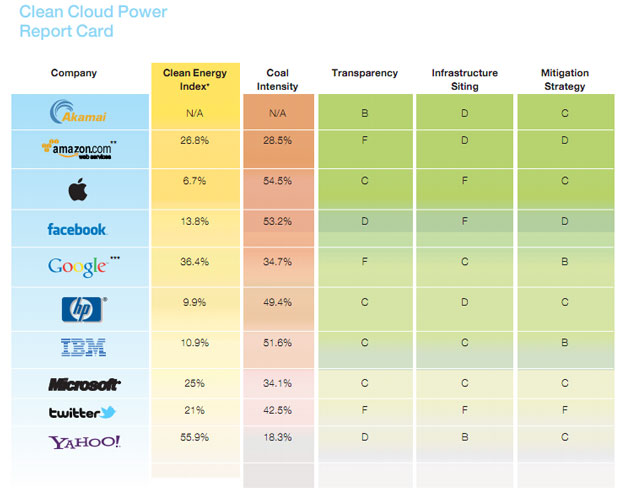 Greenpeace applauds Yahoo’s practice of situating data centers near sources of clean energy. The report also notes that Yahoo no longer purchases carbon offsets and is striving towards energy efficiency with a self-set goal of reducing data center’s carbon intensity by at least 40% by 2014.

Apple scores at the bottom of both scales partly because of its massive new data center that will draw its power off of North Carolina’s coal-powered grid. Facebook and Google also have large data centers located in the same NC area, an area dubbed the dirty triangle by Greenpeace. Facebook is right there with Apple in the rankings, but Google’s commitment to clean energy, including a $100 million wind farm investment, helps offset the coal in Greenpeace’s eyes.

Still, it’s important to remember that Greenpeace admits it does not have all the facts here. The Transparency column grades these companies on their willingness to share energy data publicly. Understandably, most don’t want to share their energy and accompanying financial data.