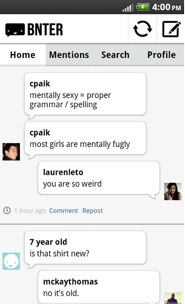 We’re big fans of Bnter, an app that allows you to share your conversations with others publicly. The same way you share photos via the web or your mobile phone, Bnter allows you to share snippets of conversations you have with friends on the web. While the startup initially focused on SMS, Bnter recently broadened its scope to allow users to share any sort of conversation, including GChat, in-person chat, email and more. Today, Bnter is launching a free Android app (which joins an existing iPhone app) and is launching a bookmarklet, and in-depth Twitter integration

The Android app (which works on OS 2.1 or higher) is similar in functionality to its iPhone cousin and the web app, and allows you to read your feed of conversations and people you are following, comment, search and add conversations. And because it is a mobile app, Bnter for Android can pull your text message stream into the app so posting is fairly easy.

Bnter’s new bookmarklet, which you can download here, allows for posting conversations directly from open chats in GChat, Facebook Chat, Foursquare comments, GroupMe, Twitter and Campfire to your Bnter profile.

Bnter, which has raised seed funding from a number of high-profile investors including Founder Collective and SV Angel, has also added a feature for automatic Twitter import of mentions on the service. Bnter users easily post Twitter conversations by linking their Twitter account to Bnter, and can review all conversations in a drafts folder before deciding to post the most interesting ones to Bnter.

For the New York Based startup, this release has been somewhat of a challenge. As Sarah Lacy wrote last week, Spark Capital reportedly reneged on a termsheet offered to Bnter, forcing the bootstrapped startup to take some drastic measures (for example, co-founder Lauren Leto isn’t taking a salary) to continue the release and product development. It just goes to show that despite certain hardships and bumps in the road, founders’ passion for their ideas can help sustain a startup in the most trying situations.

Also, you can see Leto explain why she founded Bnter in this recent Founder Stories clip.