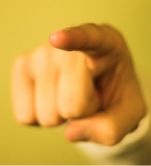 Yahoo had another lousy quarter. Revenues were down 6 percent, profits were down 28 percent. What’s more, it’s search partnership with Microsoft isn’t going so great. And the finger pointing is starting.

In a very detailed analysis, Danny Sullivan of SearchEngine Land charts the decline of Yahoo’s search revenues over the past two years. What he calls “net search revenues” (the money Yahoo gets to keep after paying off partners) is down 35 percent from a peak of $551 million two years ago to $357 million. He shows the decline in this first chart below.

During the last two quarters, Microsoft has taken over Yahoo’s U.S. search advertising in return eventually for 12 percent of Yahoos’ search revenues. The red line shows what Yahoo got to keep after paying Microsoft, and the blue line is what it makes off of search before paying Microsoft. That blue line is down 8 percent in the last two quarters You can see the gap between the red and the blue lines in the second chart below. 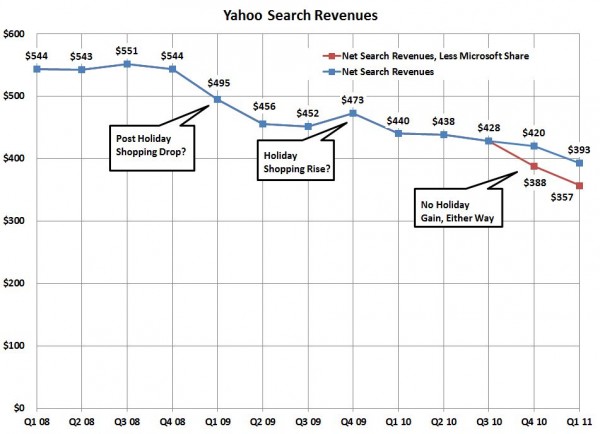 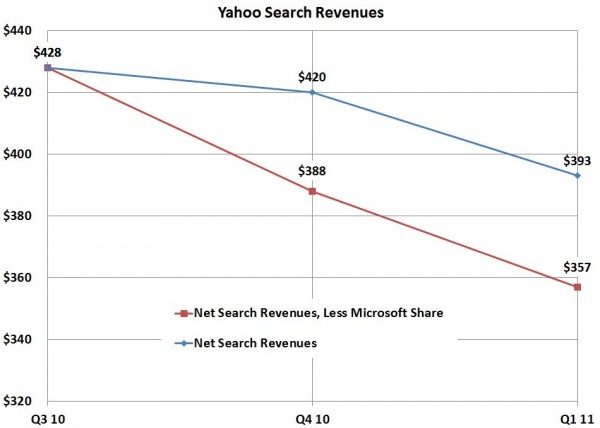 Remember, handing over search to Microsoft was supposed to come with all sorts of benefits like lower costs and more money for Yahoo.

But the deal is not working out as planned, and Yahoo blames Microsoft. It’s not quite where it should be yet in terms of its revenue per search. Yahoo CEO Carol Bartz said during the earnings conference call:

On the downside, however, adCenter isn’t yet producing the RPS [revenue per search] we hoped for and are confident as possible.

In other words, Microsoft is under-monetizing. And organic search results from Bing apparently are too good, which makes people click the paid search ads even less. Even Yahoo’s inflated search market share figures (due to slideshows and other forced search methods) weren’t enough to generate more revenues.