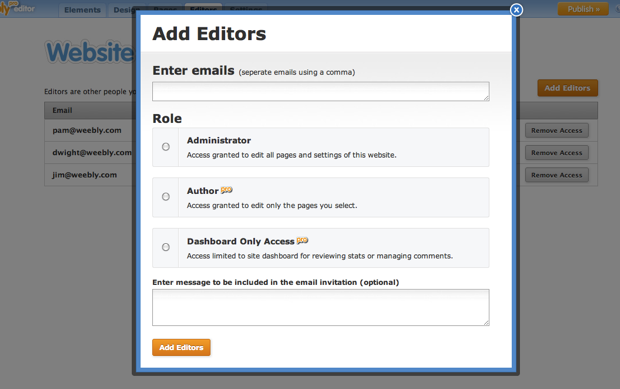 Weebly, the web-based website creator that sports an easy, drag-and-drop interface, is launching a big new feature this morning: support for multiple editors under the same account. In short, you’ll now be able to let other users edit your website (or portions of it), without handing over your main Weebly account credentials.

After logging into your Weebly account as usual, you’ll notice that there’s a new button that says ‘Add editors’. Hit it, and you’ll see a dialog box prompting you to enter the email addresses of the people you’d like to associate with your account, and three different roles they can be blessed with: Administrator (full access to edit your site), Author (grant access on a per-page basis), and Dashboard-only, which lets them view your site statistics and moderate comments. You can also choose to let authors edit pages in a draft mode that requires an admin to later push their changes live.

Cofounders David Rusenko and Dan Veltri say that this has been the service’s top-requested feature for a long time, and it’s not hard to guess why. With the new system you’ll be able to delegate tasks to coworkers, and, if you have a blog on Weebly, you can have multiple authors.

Rusenko says that, between all of the pages it hosts, the Weebly network is now the 95th top-ranked site according to Quantcast with 40M unique visitors per month.

In conjunction with today’s launch, Weebly is also introducing a revamped homepage and a tweaked tagline. CEO David Rusenko explains that when the site launched, it was all about offering a super-easy way to build relatively straightforward webpages. But over the years, as it’s added photo editing, form building, and other features, the platform has gotten pretty robust. So now they’re adopting the tagline “Free. Powerful. Professional.” with a new layout to match.