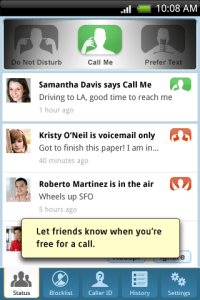 Sometimes, when you’re building a business, you just have to go with what works — even if that means a substantial pivot from your initial vision. Case in point: Beginning in early 2008, TechCrunch wrote a number of posts on a startup called Skydeck. Skydeck was a phone-productivity service that tackled mobile phone bills, enabling you to tag, sort, and search call records as you would in email. The startup raised $4 million in funding, began hiring, and expanded its voice services — the future seemed clear.

Then, in October of 2009, Skydeck released what it thought would be a small new feature, mobile caller ID. Within 6 months, the feature had drawn 250K registered users and had become the most popular of the startup’s features. So, in June of last year, Skydeck refocused its efforts around caller ID services, and renamed itself Mr. Number after its successful application.

Its initial app offered caller ID and call-blocking features, as well as reverse lookup for mobile phone users. This means that you could use Mr. Number to identify unknown landline numbers, cellphone numbers, and report telemarketers and spam calls to Mr. Number’s crowdsourced database.

Today, Mr. Number is announcing that it has grown its base to more than 2 million registered users, and that it is releasing a whole new application that builds on its prior caller ID and productivity services.

The new version of Mr. Number brings the concept of “status alerts” from the world of instant messaging to mobile voice and text. It enables you to let your friends know when you’re free for a call, when you prefer text, and when you’re incommunicado. If you’re in an important pitch meeting, or belting out some karaoke, you can even instruct Mr. Number to send all your calls to voicemail — and let your friends know when you’re free again.

For anybody that remains confused, think of your status alerts on Gmail or Skype. You can turn your status to “present and ready for chatting”, away, invisible, and so on. Apply that to your mobile phone, add enhanced caller ID, call-blocking, and lookup, and presto! you have Mr. Number.

Unfortunately, the app can’t identify callers using “blocked” numbers, but if you receive a call from an unidentified number, Mr. Number can reveal 95 percent of those callers if they’re using landlines and over 60 percent of cell numbers — all by using its crowdsourced database. Within this database, Mr. Numbers allows you to report spam calls, telemarketers, and over the course of the last few years, the company has built a sizable chunk of data consisting of caller records, identities, and, specifically, offenders.

And as to privacy concerns, if you would like to block your own caller ID information in Mr. Number, you can go to the settings in your profile, fill in the information and check the box that says “Remove my number from Mr. Number”. Once removed, you show up as “Unknown” whenever you call someone with Mr. Number.

All in all, if you’re someone who is bogged down with a ton of voicemails, Mr. Numbers is a great tool for slimming your inbox and cutting down on excessive voice and text messages. Turn on the app, and tell your friends not to call you after 9pm; I know I will.

Mr. Number is free of charge and available on iOS, Android, and Blackberry. For more, check out the app here or watch the video below: