It is difficult to understate what a run Apple is on right now. Look no further than the blowout earnings Apple reported today for its second fiscal quarter ended in March. Revenues were up 83 percent to $24.7 billion, and profits grew even faster, up 95 percent to $6 billion. Growth was strong across the board (with the exception of iPad sales which suffered from supply constraints and built up “the mother of all backlogs,” according to CFO Peter Oppenheimer). 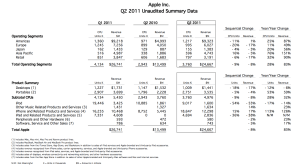 But if you dive into the numbers (click table to enlarge), you will see that three areas drove the overall growth more than any others: iPhones, MacBooks and China. The iPhone now makes up half of Apple’s revenues, or $12.3 billion in the quarter. Sales grew 126 percent in dollar terms, with unit sales up 113 percent. In the U.S. alone, iPhone sales were up 155 percent. Bringing Verizon on board helped goose the numbers, but AT&T wasn’t exactly complaining either.

As fast as U.S. sales of iPhones keep growing, it is not the fastest growing region. In “Greater China,” iPhone sales were up 250 percent. Sales of all products across Asia Pacific were up 151 percent to $4.7 billion. In contrast, Europe is a $6 billion region for Apple, and the Americas is $9.3 billion. “Greater China” (which presumably includes Hong Kong, Taiwan and other Asian markets, could soon become Apple’s second largest region.

Finally, Apple’s MacBook sales were up 59 percent to $3.5 billion in the quarter. Those MAcBook Airs are very popular. Half of all Macs (both portable and desktop) sold were to new customers switching from Windows. Sales from its own retail stores were up 90 percent overall in the quarter to $3.2 billion. And the iTunes store (which is all music, movies, and apps) is now doing $1.4 billion a quarter.

So what happened to the iPad? Apple sold only 4.7 million iPads, compared to 7.3 million in the December quarter. To some extent consumers delayed purchases in anticipation of the iPad 2, which came out at the end of the quarter. Apple sold every iPad 2 it could make, but supply issues impacted how many it could manufacture. Apple says the iPad supply issues are now resolved, at least for this quarter.

And what about Steve Jobs (who is on medical leave and was not on the earnings call)? Asked about Jobs’ active role in the company, acting CEO Tim Cook responded: “We do see him on a regular basis. He is involved in major strategic decisions. I know he wants to be back full time as soon as he can.”