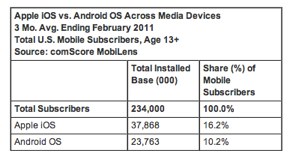 comScore has just released an interesting study comparing the reach of Apple’s iOS platform to Google’s Android operating system in the U.S. The analytics and data company is reported that Apple’s device with the iOS operating system, including iPhones, iPads and iPod Touches, have a combined platform reach of 37.9 million, outreaching the Android platform by 59 percent.

comScore says that the installed base of iPhones slightly exceeded that of iPod Touches, both of which were approximately twice as high as the number of iPads. Among the 37.9 million consumers with access to the Apple iOS, only 4 million (10.5 percent) accessed the platform via more than one device. And the combined 37.9 million iOS users is 59 percent greater than the 23.8 million combined Android OS installed base, which includes users of both Android phones and Android tablets. Of total mobile subscribers, Apple iOS has a 16.2 percent share compared to a 10.2 percent share held by Android. 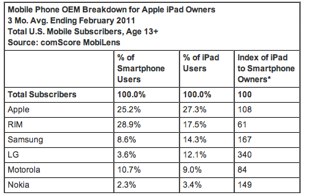 Another interesting data point comScore examined in the study is comparing what mobile device manufacturer iPad owners have adopted. While Apple is indeed the most heavily represented OEM among iPad owners, its OEM share (27.3 percent) is only slightly higher than its share among all smartphone subscribers (25.2 percent). RIM accounts for the second highest percentage of iPad owners at 17.5 percent, but this number is well below its overall smartphone market share of 28.9 percent. And 14.2 percent of iPad users had Android phones.

This data seems to indicate something we already know-Apple is not only a strong contender the smartphone race (in a dead heat with Google) but is also dominating the tablet space with the iPad. The fact is that there hasn’t been an Android tablet that has been able to gain the same sort of traction that the iPad as seen. Of course, comScore’s mobile report from a few weeks ago, which focuses on smartphones, shows that while Google is pulling ahead the Verizon iPhone is helping boost usage of the iPhone.