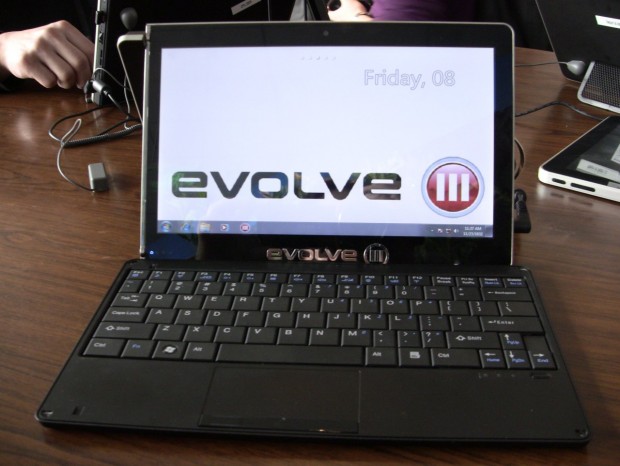 Although the trend here in the US is towards a streamlined, single-input (i.e. finger) tablets like the iPad and Xoom, intricacy and versatility are the word over in Beijing right now, where dual- or triple-boot devices like this Maestro S are (they hope) all the rage.

I’ve heard that there’s a bit of a backlash against Google and Apple for not catering to Asian markets, and others are jumping at the chance to fill in the vacancy. While I’m not impressed with Windows 7 as a tablet ecosystem and MeeGo and Android are still in their infancy, I guess it might be nice to have a device that just does it all. Why not?

The Maestro S (being shown off at IDF Beijing) has a new 1.5GHz Atom Z670, 2GB of RAM, and 32 gigs of SSD storage. Its built-in accessories include a full keyboard and trackpad, plus a big ol’ kickstand there on the left side. It looks chunky as hell, but they’re claiming 16 hours of battery in Android and 10 in Windows 7.

Will it ever come to the US? I doubt it. It’d be mighty expensive and it goes against what consumers are demanding right now. But just so you know, these things are out there. Netbook News has more information and a video for you, along with a good round-up of the other good stuff they saw at the conference.