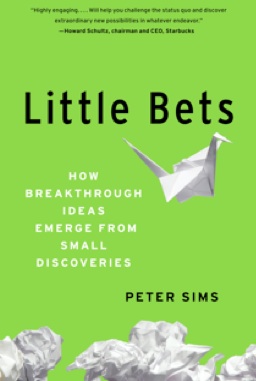 Google, Pixar, Twitter. All of them started as side projects or experiments which only later turned into big ideas. In a world of lean startups, the mantra is to get a product out there in the hands of consumers and keep making changes until something clicks. TechCrunch contributor Peter Sims (@petersims) has a new book out hat explains why little bets are more likely to lead to big ideas than big bets. It is called, appropriately enough, Little Bets: How Breakthrough Ideas Emerge from Small Discoveries, and it is just hitting Amazon and the book stores this week.

Sims, who is a recovering venture capitalist, recently offered TechCrunch readers a preview of his thinking in a guest post which turned out to be very popular. He wrote:

The truth is, most entrepreneurs launch their companies without an brilliant idea and proceed to discover one, or if they do start with what they think is a superb idea, they quickly discover that it’s flawed and then rapidly adapt.

Of course, everyone wants to make big bets.  That’s a Silicon Valley maxim.  Go big.  Be bold.  But brilliant ideas are over-rated and people routinely bet big on ideas that aren’t solving the right problems, including Google Wave and WebVan.  Pixar storytellers must make thousands of little bets to develop a movie script, Hewlett Packard cofounder Bill Hewlett found that HP needed to make 100 small bets on products to identify six that could be breakthroughs.

Just as Twitter went from a small bet to a big one, small bets are affordable and achievable ways to learn about problems and opportunities, while big bets are for capitalizing upon them.