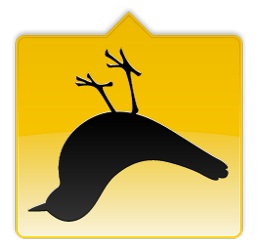 On reading today’s report by the Wall Street Journal that Twitter is in talks to buy TweetDeck, I believe the only reason it is doing so is to protect its turf.

Less than a week ago, CNN wrote a piece that UberMedia will be developing a competitor. Ubermedia, is the same company, that was supposed to have bought TweetDeck two months ago. UberMedia is also the same company that has been on an acquiring binge of popular Twitter clients—UberTwitter, Echofon and Twidroyd, namely.

Lets first look at some major milestones of the Twitter app economy:

I think there are a number of non-obvious places, like desktop publishing was on the Mac, where something entirely new will be built on top of Twitter.

This massive base of users, publishers, and businesses is a giant playground for developers to build their own businesses on, and this means the opportunity has grown for everyone. With more people joining Twitter and accessing the service in multiple ways, a consistent user experience is more crucial than ever.

Having laid down the context, here are 5 reasons why Twitter will kill Tweetdeck

1. Too many apps is too confusing.

People are looking for an app from Twitter, and they’re not finding one. So, they get confused and give up. It’s important that we optimize for user benefit and create an awesome experience.

Will they now have two different official Twitter clients on the Mac, iPhone, iPad, and Web with very different experiences to keep them confused?

Twitter fears that Ubermedia might run away with its users and convert them.  TweetDeck today asks users to create a separate TweetDeck account.  As TweetDeck adds in more unique features that users begin to rely on, their loyalty could shift to TweetDeck.  To developers, Twitter is signaling that the deal is more about protecting itself rather than to develop TweetDeck further in-house.  Sure, if you are a developer and can capture market share as large as TweetDeck’s, you are welcome to try. But we all know that is very hard and is capital intensive as being exhibited by UberMedia which has raised $30 million, and is still being slapped around by Twitter.

Alternatively, Twitter is giving mixed signals to developers yet again. Having said it is not good business to develop clients, it is now talking about acquiring one within a month. I assume, it does not want to “screw up” again.

Twitter does not care about supporting Facebook, Foursquare or any other social networks that TweetDeck currently supports. And Deck.ly for catching messages that spill longer than 140 characters? Forget it.

4. The past Is prelude

Look at what happened to Tweetie. It was killed and came back as Twitter for iPhone. The #newTwitter on twitter.com has Tweetie developer’s Loren Brichter’s fingerprints all over it. Developing Twitter for Mac further and taking it to Windows would definitely lead to a consistent user experience (which Twitter seeks, as suggested in the quote above to developers). Managing and maintaining two distinct codes bases/ products and growing them is very hard.

5. The TweetDeck experience can be reproduced

It would be relatively easy to create the TweetDeck user experience on the desktop with Twitter. Here is what it would take to convert Twitter for Mac into Tweetdeck: “Detachable” columns. A right click on any sidebar menu item should give me the option to ‘detach’. (Below is my very artistic mockup). As long as my lists stay intact, my Twitter experience can be replicated from one client to another.

If Twitter does end up buying Tweetdeck, the product as we know it is a goner. 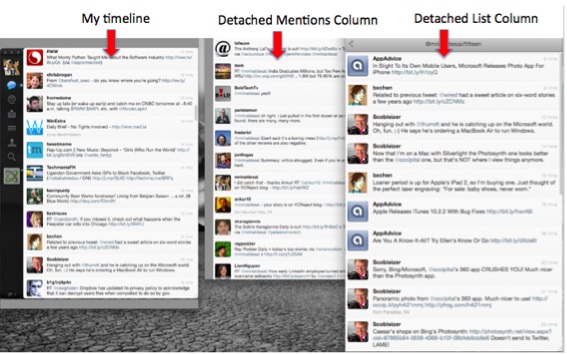