When Nihal Mehta launched Buzzd with co-founder Deepen Shah, he believed in the power of the check-in and essentially created an city guide that aggregated check-ins from Foursquare, Gowalla, and others. But because of the competitive landscape in the location-based network space, Buzzd never really took off. So Mehta went back to the drawing board, with the hope of creating a service that would combine the element of the check-in he found intriguing with Buzzd and advertising and marketing elements (Mehta’s first startup mobile marketing service Ipsh! was sold to Omnicom years ago). The result, which he calls “a culmination of everything he’s done,” of this is Local Response, a new web-based tool that allows local businesses to respond to the “check-in” on social media sites with marketing campaigns to promote transactions.

LocalResponse aggregates real-­‐time social media check-­‐ins from Facebook, Twitter, Foursquare, Gowalla, Instagram and dozens of other services to provide a simple interface for local businesses to directly respond to their most influential and valuable customers. What’s compelling about the platform compared to competitors is that it analyzes massive amounts of data in addition to check-ins from the Twitter firehose, photo sharing sites and more to find other forms of check-ins. These could be posting a picture on Instagram of a dish from a restaurant or Tweeting that you are visiting a particular bar.

With hundreds of millions of Tweets sent out per day, and millions of check-ins and other data, this is not a simple task. LocalResponse’s proprietary technology collects and prioritizes this information both explicitly (i.e. check-ins on Foursquare) and implicitly (by analyzing natural language on Facebook, Twitter, etc.; e.g. “I’m headed to ShakeShack”). Mehta says most check-ins are actual implicit and many social media platforms catered to helping businesses track check-ins miss this key data.

Not only does Local Response track all of this data but it allows businesses to respond to these Tweets and messages with a marketing campaign, coupon or advertisement. So Shake Shack could send a Tweet back to someone who had just snapped a photo of a burger with a link to a 10 percent off coupon on the next visit. The actual page will feature a logo of the establishment, the original Tweet sent by the consumer, the Tweet send back by the business and the promotion or coupon. Local Response has actually creates a number of canned responses which businesses can automatically send.

For the past six months,  LocalResponse has been running a private beta, with over 2,000 campaigns for local businesses in New York City. The links in the Tweets and messages sent by these local businesses to consumers who “checked-in” to their establishment are averaging a 60 percent click-­‐through rate and 15-­‐20 percent redemption rates. That’s high and impressive.

Mehta says that the platform is so highly-focused in its data collection, that it can send highly targeted Tweets to consumers who are interested in the promotions or campaigns. For example he says that Local Response will run two to three hundred search terms across its data for a particular business. Also, the aim of Local Response is not to overwhelm consumers’ stream with advertisements. Users will never receive more than one message in 7 days, says Mehta.

While today’s release is focused on catering to small and local businesses, a platform for brands and agencies is in the works. In addition, Local Response closed a $1.5 million in funding this past December from Verizon Ventures, Charles River Ventures, and Metamorphic. The company plans to raise a new, larger round of funding this Summer. As for Buzzd, Mehta hopes to find the location-based network, which currently has about 1 million users, a new home.

For now, Local Response is free for businesses. Eventually the startup plans to go the freemium route and will also charge for the brand-focused application. And Local Response is launching with half a million businesses that are already pre-indexed (with search terms). All they have to do is type in the business name, and they can get started using the platform.

Local Response faces competition from social media management platforms like Sprout Social, as well as Foursquare, Gowalla, and other networks that offer their own merchant-focused services. But what makes Local Response so compelling is that it captures more intent-focused data beyond the average check-in. Photos, Tweets about a restaurant or neighborhood, and more can also serve as a type of check-in and Local Response empowers local businesses to turn this data into actionable results and possibly transactions. 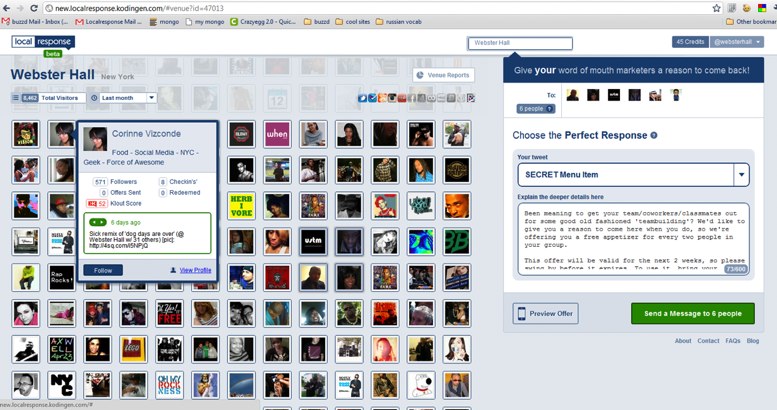