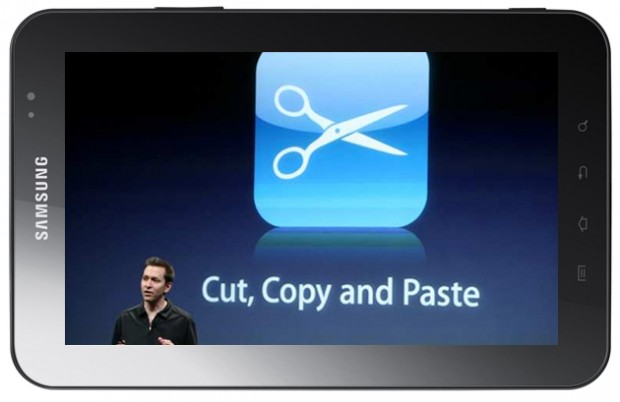 Wowza. Think that Samsung’s Galaxy phones or Galaxy Tabs are a little bit too much like the iPhone and iPad? Apple agrees. So much so, in fact, that they’re taking Samsung to court over it.

According to the Wall Street Journal, Apple has just filed a suit against Samsung on the following basis:

“Rather than innovate and develop its own technology and a unique Samsung style for its smart phone products and computer tablets, Samsung chose to copy Apple’s technology, user interface and innovative style in these infringing products”

So, what does Apple want out of all of this? A bit of everything: an injunction (potentially preventing Samsung from manufacturing more Galaxy devices until the case is settled), damages (read: money), and, perhaps most importantly, being able to legally say “Yeah, Samsung totally copied us.”

The timeline, for those wondering: Apple’s first iPhone was released in 2007. By the time the second iPhone was released in 2008, the series was already quite clearly a hit. In 2010, Samsung released the Galaxy S — which, while Android-powered, was running a custom user-interface (TouchWiz) that certainly does bear a stronger resemblance to iOS than the stock Android skin does. In April of 2010, Apple released the original iPad; Samsung’s Galaxy Tab was announced in September of that year.

It’ll be incredibly interesting to watch how this case goes, as it sets a rather important precedent. We’re moving beyond enforcing patents on specific ideas here, and into the realm of simply shouting “Hey, they copied us!” when competition starts to heat up. While Apple certainly made the idea of displaying a grid of icons on a slab of glass popular, it’s not a novel one. Once that idea has been done once, there are only so many unique ways to do it.

Also interesting: Samsung makes part of the iPhone and the iPad. Samsung has supplied the processors for Apple’s mobile devices from the very beginning, from the S5L8900 in the original iPhone to the A5 in the iPad 2.