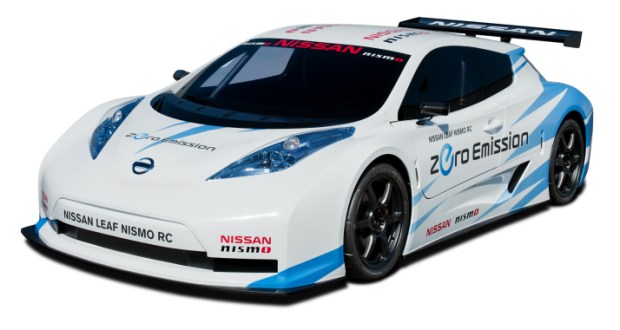 Created for “a series of special demonstration appearances,” this Leaf Nismo RC is a racing-based rethinking of the Leaf design and powertrain. They’ve shaved off about 40% of the weight, bringing it down to just over 2000 lbs, lowered it to have only 2.4″ of clearance, and of course switched it over to rear wheel drive.

The performance is… well, we can’t expect too much, since it’s more or less an optimized Leaf, not a sports car from the ground up. So 0-60 in 6.85 seconds is actually quite impressive. The top speed of 93, not so much, and the running time of 20 minutes won’t have it winning any endurance races.

They did it mainly to combat the idea that electric cars aren’t sporty. I guess they haven’t heard of Tesla. Here’s the full press release, with a few more specs for racing enthusiasts:

The name on the back panel, just under the massive adjustable rear wing, says Nissan LEAF™. The powertrain is an 100% zero emission advanced Lithium-ion battery design, just like that found on the world’s first affordable mass market electric vehicle. And despite its lack of rear doors, rear seat, trunk, audio system, navigation, carpeting and other amenities, there is a discernable family resemblance. But that is where the similarities between the production Nissan LEAF and the Nissan LEAF NISMO RC end. As indicted by the “RC” – for Racing Competition – this new electric vehicle, which makes its world debut at the 2011 New York International Auto Show on April 20th, is purpose-built to bring new meaning to the term “Racing Green.”

Already a world leader in zero emission production vehicles with the late 2010 launch of the Nissan LEAF passenger vehicle in the United States, Europe and Japan, Nissan is now looking at the racing world as a way to draw attention to the seemingly untapped potential of electric vehicles.

“Combining the talents of NISMO, Nissan’s world renowned motorsports group, and engineers behind some of the company’s Super GT and FIA GT1 race teams, the Nissan LEAF NISMO RC will serve as a rolling laboratory for the accelerated development of EV and aerodynamic systems, as well as a platform for the development of new green motorsports series,” said Carlos Tavares, chairman, Nissan Americas, speaking at the New York International Auto Show.

Dimensionally, the race car features a 3.9-inch shorter wheelbase, is 0.8 inches longer and 6.7 inches wider. The most dramatic difference is height, with the NISMO RC sitting more than a foot (13.8 inches) lower than the production Nissan LEAF. Ground clearance is limited to 2.4 inches, compared to 6.3 inches for the road going car. And, at 2,068 pounds, the race car weighs in at about 40 percent less than the production vehicle.

The layout of the NISMO RC is also markedly different from the production sedan, offering a mid-ship location for the battery pack, electric motor and inverter – with drive to the rear wheels versus the production Nissan LEAF’s front-wheel drive. The NISMO RC also utilizes a double-wishbone suspension design front and rear and driver-adjustable brake balance. It rides on 18-inch 6-spoke wheels and P225/40R18 Bridgestone racing tires.

Like the production Nissan LEAF, the NISMO RC is powered by a lithium-ion battery composed of 48 compact modules and a high-response 80kW AC synchronous motor that generates 107 horsepower and 207 lb-ft of torque. It can be charged up to 80 percent of its full capacity in 30 minutes using the quick charging port located inside the rear cowl. And unlike other competition vehicles, the NISMO RC has no tailpipe, no emission of CO2 or other greenhouse gases while being driven, and no exhaust sound.

In preliminary testing the NISMO RC produces 0 to 62 mph acceleration in 6.85 seconds and a top speed of 93 miles per hour. It is projected to have a running time of around 20 minutes under racing conditions.

“There’s a perception among some people that electric vehicles fall on the dull side of the automotive enthusiasm scale – which is certainly not the case with either the production Nissan LEAF or this electrifying Nissan LEAF NISMO RC,” added Tavares. “Nissan LEAF owners are fully embracing this new world of zero emission technology. We believe the same potential exists in the motorsports world as well, with Nissan proud to be first on the starting grid.”