It’s big screen week on Fly or Die. This week, John Biggs and I take a look at the HP Touchsmart All-in-One PC, a 14-inch Toshiba portable monitor, and the new Businessweek iPad app. As usual, a surprise guest joins us to defend his company’s product decisions. 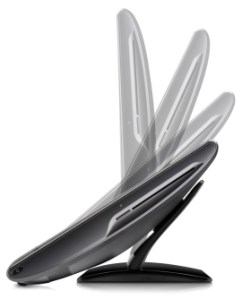 HP has been trying to bring touch computing to desktop PCs with its Touchsmart line. The problem has always been that raising your hands to manipulate a touchscreen in front of you from a sitting position is unnatural, uncomfortable, and tiring. To address this issue, the new all-in-one Touchsmart reclines so that you can go from regular keyboard mode to surface computing mode. It is an improvement from past efforts, but to me it’s a mistake to have a device with dual modes. You are going to pick one—keyboard/mouse or touch—and ignore the other. Does everything really need to be a touchscreen?

The Toshiba portable monitor also seems clunky. For a standalone monitor that you plug into your computer via USB, it is lighter than any standard monitor. But in the age of tablets, it is really competing against fully functioning computers wit touchscreens that are slightly smaller. It’s a niche product at best.

Finally, we have the Businessweek iPad app, which I reviewed earlier in the week. It brings the print magazine to the ipad with a $2.99 a month iTunes subscription. I think it could have been so much more. Even Biggs agrees.