TV is just not the same without Twitter and Facebook chatter. Tonight’s prequel movie Burn Notice: The Fall of Sam Axe comes with social chatter about the show on your laptop courtesy of Echo, the realtime commenting system. The USA Network launched this companion site, which pulls in comments, Tweets, Facebook status updates and Fan Page comments, as well as YouTube video and Twitpic photos about the show.

Echo gathers it all into alive chat feed, which is then curated, and the best comments appear on TV. Prior to the show, actor Bruce Campbell answered questions online about the show. In the first two hours, 18,000 fans were commenting in the stream, hoping their comment would be plucked into the curated channel which was shown on TV.

Yes, all of this harkens back to AOL chatrooms filled with minor celebrities, but this is realtime, dude. And the feedback loop is now plugged into the broadcasting system. Your Tweets will now be televised. 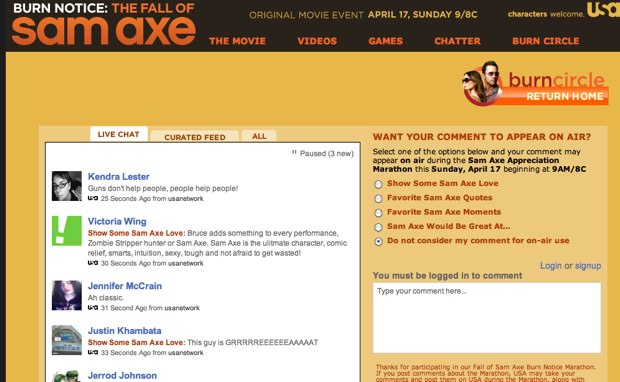