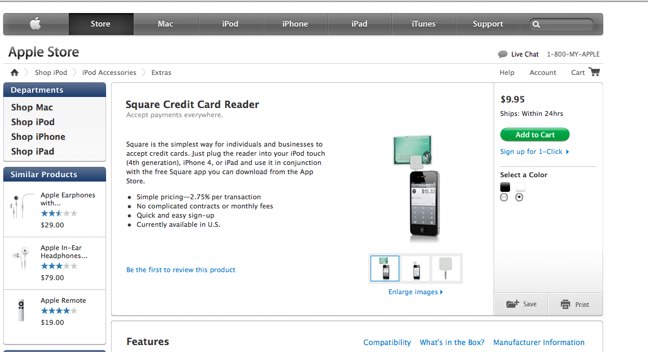 Mobile payments company Square has landed a big coup—sales placement on Apple’s online store. And we’ve just confirmed with Square that the startup has a deal for in-store sales as well. Apple will start selling Square devices in all of its U.S. retail stores starting this week.

Square offers both an iPhone/iPod Touch and an iPad app which allows merchants to process and manage credit card transactions with a handy little credit card swiping device that plugs into the headset/microphone jack. Apple has shown some love for Square lately, so it’s not entirely surprising that the payments startup has forged a deeper relationship with the Cupertino-based company. Most recently, Apple CEO Steve Jobs showcased Square’s technology at the debut of Apple’s iPad 2. But to be featured on Apple’s online store and in its brick and mortar operations is a big deal.

This is Square’s first large-scale in-store retail promotion and it landed a huge fish. Millions of consumers visit Apple’s retail outlets each day, and this will certainly translate into more sales and exposure for Square. While display location may vary by store, we hear that Square will be included in the store area where main consumer-oriented accessories are displayed. Apple and Square will also be partnering to host educational seminars at the stores, where consumers can learn how to use the device.

Square’s device is selling at the store for $9.95 but users get a $10 square credit when they sign up for an account and the apps are free. It’s important to note that when sign up for Square on its website, the device is free, and the company only charges merchants 2.75 percent per transaction. You can also purchase the device in black or white (previously the Square devices were only sold in White).

Clearly Square is taking a bit of a bath on the device sales here. Apple is probably taking some sort of cut from the transaction, and Square is giving merchants a $10 credit, so effectively, the company isn’t really making any money. In fact, it appears that Square could be losing money on this. But an endorsement and placement from Apple could boost sales and usage for the payments device so perhaps all will even out in the end. Also, Apple managing distribution and shipping of Square devices means that the startup will be able to give users access to quicker and more efficient delivery operations.

Interestingly, Apple doesn’t use Square in its stores for transactions but perhaps this could change as Square gains more traction and expand with international support. Apple also sells Square competitor VeriFone’s card reader in its retail stores.

Square, which was co-founded by Twitter’s Jack Dorsey, has been on a roll of late. The startup just raised $27.5 million in new funding, and is gaining a lot of a lot of buzz, most recently debuting a fairly large billboard in Times Square and announcing that it is processing $1 million in payments per day. Square also announced that it dropped the $0.15 per transaction charge for businesses using the mobile payments service.

COO Keith Rabois told us in January that the startup is expected to process $40 million in transactions in Q1 of 2011 and is currently signing up 100,000 merchants per month. That’s compared to 30,000 monthly signups last Fall.

I think there’s no doubt that with its latest deal, those numbers should multiply pretty quickly.