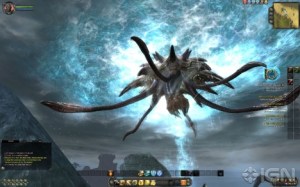 When I was growing up, games were played offline — whether it was Number Munchers on an Apple2GS, or Super Mario Bros. on Nintendo’s NES console. But, needless to say, that 8-bit world is miles behind us.

Like it has done to every other industry, the Web completely altered the course of gaming. It brought connectivity and scale to video games, allowing huge groups of people to play each other in a single game, simultaneously. Even so, most video game users continued to get their gaming offline; as is often the case, online adoption was mostly limited to geeks in solitude.

It really took the explosion in popularity of Zynga and Facebook games to bring swaths of casual gamers online. The draw of games like FarmVille obviously being the enhanced social features (and spamming). But, on the flip side of the coin, there are “premium” online games, which boast 3D graphics, a more immersive and interactive experience, and enable our strange fantasies through features like role-playing. There are many examples, but the most widely recognized would probably be World of Warcraft.

Massively multiplayer online role-playing games, or MMORPGs as they’re affectionately known, like World of Warcraft, are inherently social and have been a staple of online gaming for over a decade. But, one online games developer, Trion Worlds, is adding a new spin to online gaming and is now attempting to put the icing on the social gameplay experience with its new World of Warcraft competitor, called Rift.

Rift is a game set in the fictional world of Telara, in which creatures of all shapes and sizes and from all planes of existence mash together. (Think Star Wars’ cantina scene.) Through physical rifts, monsters attack Telara’s mother cities and just act like monsters, really. Unsurprisingly, your mission is to stop the monsters. It’s not a particularly world-shaking idea, nor are the characters, but the execution is pretty amazing.

The key to Rift’s successful massive and synchronous gameplay experience begins with the fact that Trion’s games are server-based, meaning that the gameplay, characters, and interactions between players are housed in Trion’s server cloud. This allows the company to remodel less-played portions of the game or add more content on-the-fly.

And, in the case of Rift, Trion breaks its servers down by function, rather than by location, like most other games. Again, this means that one set of servers will handle non-player functions in the game’s world, another will process encounters with “bosses,” for example, and another will deal with functions directly involving the players’ characters. This means that processes can be started and stopped more quickly and easily, causing less lag and other glitches in gameplay. Trion can make changes to the game in realtime, right in front of players, Trion CEO Lars Buttler told me. That’s pretty cool. 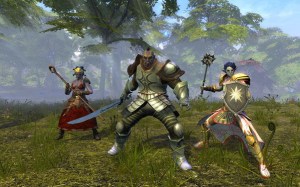 But where Rift really sets itself apart is its integration of social media into gameplay. Rift allows you to Tweet, and create and share both pictures and videos from inside the game. In the in-game chat bar, you simply type “/tweet” and your text is posted to Twitter. You can capture screenshots and post them to Twitpic or Yfrog, or you can take video of what you’re playing and post it directly to YouTube.

Why would you want to take video of what you’re playing? Well, it allows you to make tutorials for other gamers, or to show off your mad skills — or your avatar’s crazy dance moves. And that, my friends, is priceless. I think.

Furthermore, Twitter, as Charlie Sheen so adequately demonstrated, is a tool for promotion — especially among brands and celebrities. And now for gamers. “Players have achievements and accomplishments in Rift’s game world, but we want to take that beyond the game world into the real world, so that friends and fans and followers can be a part of that as well”, Buttler said. “We want to allow gamers to become celebrities, in-game and in the real-world”.

And Rift is making a pretty serious splash; gamers are buying in. Prior to its launch in late February, over 1 million people created accounts and gamers have spent more than 2.5 billion minutes gallivanting around Telara. That’s nearly 42 hours per person. What’s more, since the game’s launch, users have sent over 600,000 Tweets. And more than 15,000 YouTube videos have been uploaded since video functionality was launched just over 10 days ago.

Not only is the online game developer trying to break down the barriers between gaming and the real world, it’s taking on other entertainment mediums as well. Building on the success of James Cameron’s Avatar, Trion is partnering with the Syfy Channel to create a TV show that is part fictional drama, part game. The project, tentatively called “One World”, will follow a group of main characters as they travel through an alien world. Their story will be concocted by screenwriters, but the battles that rage in different cities among competing factions will be determined by those playing the game online.

Previous attempts to meld video games with film and television have been less than well-received. But the project is audacious at the very least, and marks another innovative push into cross-genre, “next” entertainment. Even James Cameron was intrigued, telling the LA Times, “I think it’s great, the approach of it has a lot of promise — you’re getting real people to invest something in a character that populates the background … It’s almost like having an artificial intelligence at work behind the primary story but your audience is the A.I.”