Delicious founder Joshua Schachter always had a funny answer when we asked him what his new startup, Tasty Labs, would focus on.

Last year, for example, he said “I’m either going to launch an open source operating system for unmanned aerial vehicles, or build a first person shooter to teach non-violent solutions based on buddhist principles. Or a pet food review site. Which one do you like best?”

But a few months have gone by, the company raised a nice store of cash and they’re about to release their first project, currently called “Secret Tasty Labs Prototype.” It’s time to get seriousish, and Schachter is starting to talk.

I have been testing the service along with a few friends and family of the team (and investors). “Welcome to our secret society of trusted Tasty Labs testers. We’re inviting you to try out our first prototype application,” says the happily received email in my inbox.

There are ground rules to my participation. We can’t go into too much detail on the product just yet. But we can write a teaser and talk about it in broad strokes. The service is a place for users to interact and follow others (think Quora). The main purpose of the interaction is asking for and giving advice on things and services people need. The best restuarant in San Francisco open late. Who to tall to get a phone line installed with out going crazy. Etc. There’s only a handful of people using the service but robust conversations are breaking out. It’s an engaged audience and real content is being contributed and shared. 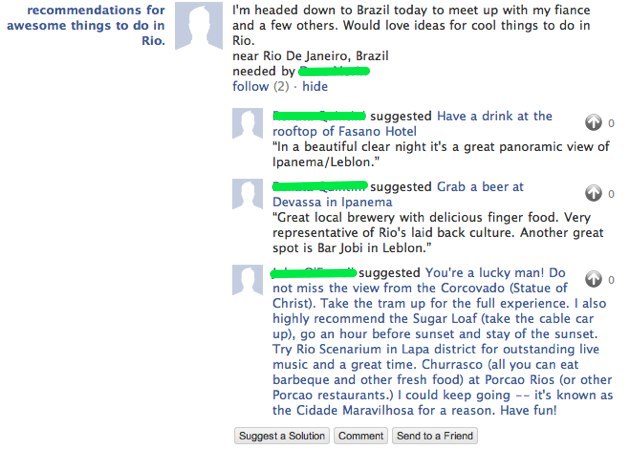 There’s a lot more to it than that. In particular, on the back end a lot of the free text people are typing in is being structured and organized. If a lot of people are talking about “Acme Sushi,” it’s going to get auto linked to a page with information about Acme Sushi. You can see the evolution of this in process in the teaser screenshot above, where the entire last answer is a link instead of just parts of it. But overall, it works really well.

They’re trying to solve many of the issues that Aardvark, purchased by Google a year ago and then promptly never heard from again, was aiming for too. Find friends and friends of friends who can give you first hand advice on tackling everyday problems, and then use software to make the interaction as useful as possible. While Aardvark stripped social features relentlessly away from its product, keeping it a one on one experience, Tasty Labs is embracing social, and the still young product may have real traction. Only time, tweaks and scaling will tell, but this is a hell of a team. You’ll also see a lot of nice auto-refreshing, Flash-free features. The basic design architecture and UI is very good.

If you’re an engineer and want to work with this team, you’re in luck. They’re hiring like crazy, Schachter tells me. Contact them here. This is the first of many projects the team is working on.

And if you are dying to try out Tasty Labs, here’s how you get in. You have to get someone to tell you the secret URL for the service, which is wide open once you get there. They’ll probably shut down new signups once that happens, though, so be quick or just wait a few weeks until they open their doors to all.