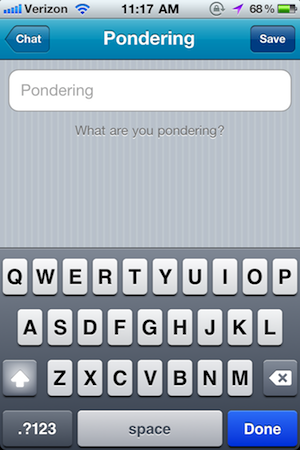 Of all the apps clumped together in the group messaging space, Yobongo is fairly unique. It’s far more reliant on realtime chat than the others which can be fun, but also leads to its own set of problems. For example, what if you don’t know anyone else in the chat room you’re in and you need something to talk about? That’s where a new feature called “Pondering” comes in.

Launching today alongside an update to their iPhone app, Yobongo Pondering allows users to fill in a very brief (15 characters or less) blurb to let others know what’s on their mind. A user fills this in on their profile and then it appears next to their name when they send a message no matter which Yobongo room they’re in. “Ponderings are the anti-away message,” Yobongo co-founder Caleb Elston says.

“Ponderings provide more context for the discussion without being overbearing. They are a lightweight way to share as well as quickly peruse the conversation and glean more about it. They add another layer to the conversation,” he continues, noting that your Pondering also clears after 24 hours so they stay relevant.

“We have been using them internally and even with just a few close friends testing them they have proved to be immensely useful for understanding more about what people are thinking about, for instance someone had put ‘Coffee’ and then someone asked if they wanted to go to Sightglass,” he notes.

This new version of the app also comes with over 20 bug fixes and speed optimizations. “We’re always working to make it more efficient to start communicating,” Elston says.

You can find Yobongo in the App Store here. 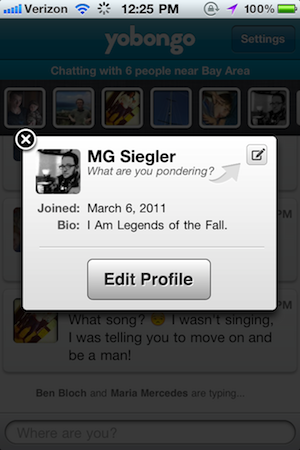 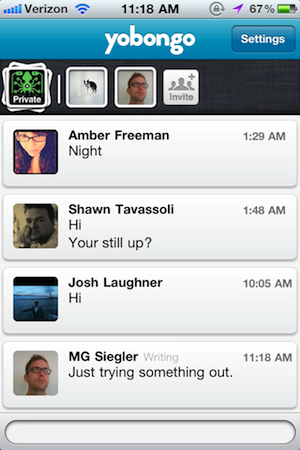