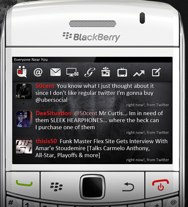 I didn’t think I’d ever write about UberMedia and 50 Cent in the same sentence but here goes—UberMedia is partnering with rap star 50 Cent to launch a branded Twitter theme for BlackBerry phones called Uber50. The new theme is essentially UberSocial for BlackBerry with 50 Cent’s branding and a few extra features.

Extra features include special background art, access to 50 Cent and G-Unit’s Twitter lists and a customized look and feel. Users can also pay $1.99 for additional art, special themes as well as sounds that are triggered by actions such as sending a Tweet or direct message, all recorded or selected by 50 Cent (who has 4.4 million followers on Twitter).

The recording artists said in a statement: Twitter has become an important way for me to communicate with my fans and for my fans to communicate with each other. We’re all big users of UberSocial on the BlackBerry and already use many of their current themes to customize the look of the app, so it was natural for me to work with UberMedia to develop a special theme.

What’s interesting about the announcement is that UberMedia, which is now the largest developer of Twitter applications is pursuing branding opportunities with celebrities when it comes to clients. UberMedia-owned Tweetdeck also offered branded clients in the past, so perhaps we’ll see similar announcements with the company’s other applications.