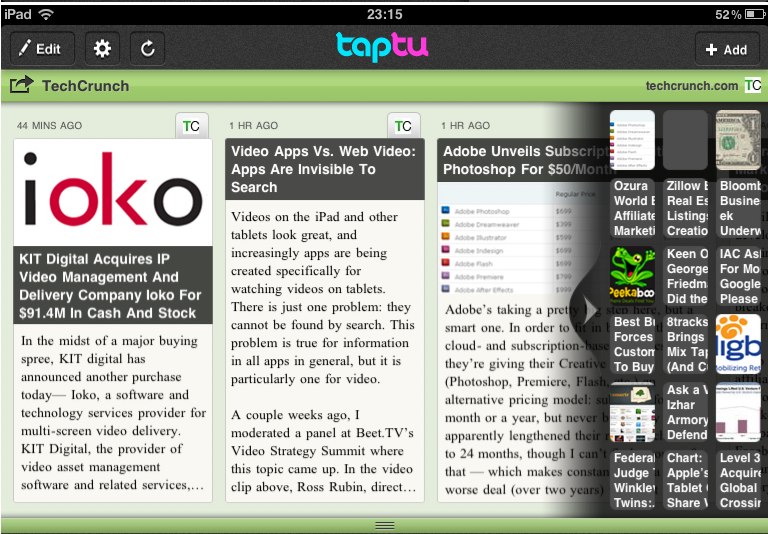 Another day, another launch of a Flipboard-like news and social reader for the iPad. It seems like every day a new app launches that aims to offer a social news reading experience for the iPad, including Pulse, Summify, Flud and others. And today, Taptu is debuting its free iPad app, which offers a sleek, social news service for the tablet. Taptu has already offered the service on the Android and the iPhone.

Taptu’s iPad app allows you to bring in streams of content from news sources, your Facebook, LinkedIn and Twitter streams. The design itself is sleek and clean, allowing you to separate each stream. Instead of accssing RSS feeds for news sources, Taptu uses its proprietary mobile search technology to aggregate news from thousands of news sources.

The app offers a StreamStore, which allows you to search and choose for news streams. You can also import your RSS feeds as well. The app goes beyond just aggregating news from your social feeds and sources and allows you to personalize your streams. You can act as a DJ for news streams, and can aggregate and merge select news feeds into one stream. So you could create your Tech news stream with various technology news sources. You can also change the size of the stream to display its content more prominently or modify the color of your streams, allowing you to color code by interest.

Taptu has also integrated its recommendation technology which will serve new content from news sites and blogs based on what you read within the app. Taptu will serve related articles, both by topic and by source. And you can share your newly created streams with friends on the app. In terms of Facebook and Twitter, the app will display full stories in a pane from links shared by friends, so you don’t need to leave to app to access shared content.

An interesting sidenote-Taptu’s iPad app is the brainchild of CEO Mitch Lazar, a former journalist for CNN and member of the founding team of CNN.com. He says that the virtue of Tatptu’s app is that it mixes four important elements in development—relevancy, indexing, search crawling and sleek presentation. “It’s not just a magazine format with a beginning and an end,” explains Lazar. “Taptu is built around a continuous stream.”

For Taptu, this app is an entry point. The company says that the next step will be to create user accounts and perhaps approach monetization with premium features. Taptu also plans to launch a universal, HTML5 app that will allow users to access the same app across iOS devices.

If you are a power reader or a news junkie, Taptu’s app is the way to go. Not only does it allow you to access a large number of news sources (thousands), in an easy to read interface, but it allows you to personalize and customize your feeds, which is a useful feature. My only complaint is that if your bring in a lot of feeds (and news from your Twitter and Facebook streams); the app can get a little cluttered. But you can easily close streams if things get crowded. 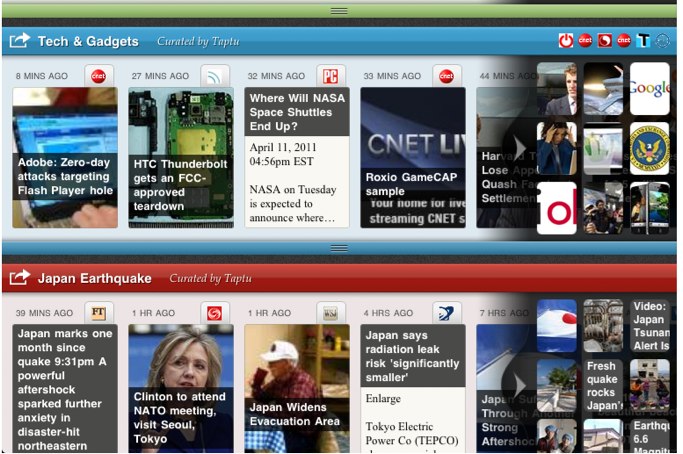