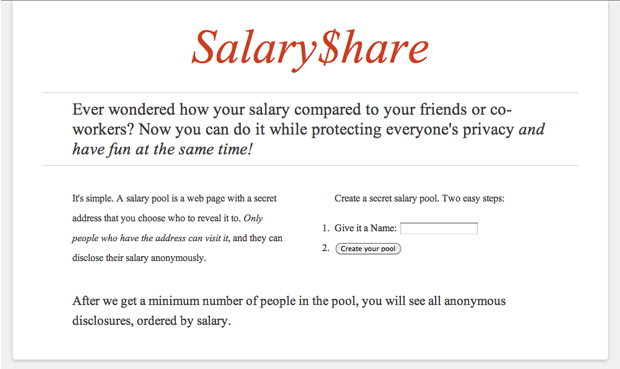 Meet SalaryShare, a simple salary comparison service that lets you anonymously pool salaries with your co-workers, friends, people on Twitter or anyone you feel competitive with really. Create a pool, send the link to four people who will disclose their salaries and the site will reveal the salary span, without revealing who makes what.

Inspired by a HackerNews thread about “The Programmer Salary Taboo,” the folks at tech job posting site job4dev.com created the page as a way to help developers and other wage slaves better gage where they compare, without spilling the beans about who exactly is making millions and who is working for food.

Salaries indeed are a point of discomfort and/or pride for most people but especially here in the tech sector, where a Google intern might make tens of thousands more than a startup CEO. You never quite know where you stand when accepting an offer, I mean imagine my surprise when I realized that all the guys at TechCrunch were paid at least 100K more because of some weird rule that Mike has.*

*This is not true.