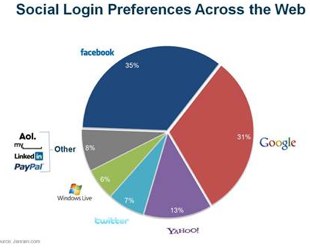 Janrain, a user management platform that enables third party sign-in with 18 different providers, including Facebook, Google, and Twitter; is releasing its Q1 2011 report today. Janrain’s report analyzes data from networks for social login and social sharing across the 350,000 websites worldwide that use Janrain sign-in product, Engage. For the first time in a year, Facebook has surpassed Google as the consumer preference for signing into Internet sites using Janrain. 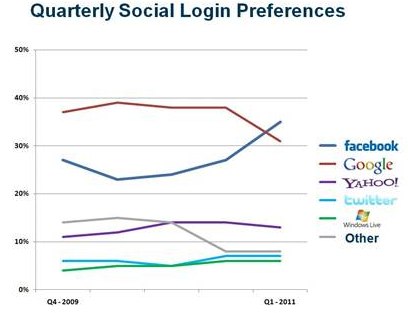 Janrain actually analyzed sign-in data by type of site as well. For example, Facebook is the most popular sign-in choice on news media sites for the second consecutive quarter, with 34% share, up from 32% in the previous quarter. Yahoo commanded a 28% share of all social logins in the news sector. Of course, Facebook’s share could increase more with the introduction of Facebook’s new commenting system. 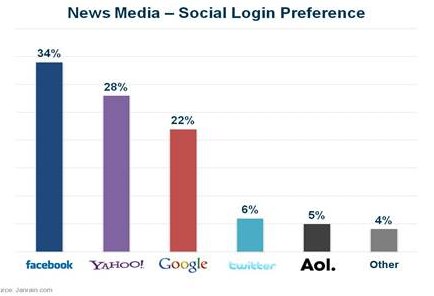 Facebook has also picked up momentum in the retail space, says Janrain, with a quarterly growth rate of about 5% over the past three quarters. The startup says that this increase is at the expense of Yahoo, as opposed to Google, whose share has held steady over the past four quarters. Facebook’s login share on retail sites is up 10% over the past year, and Yahoo’s login share is down 11% year-over-year. 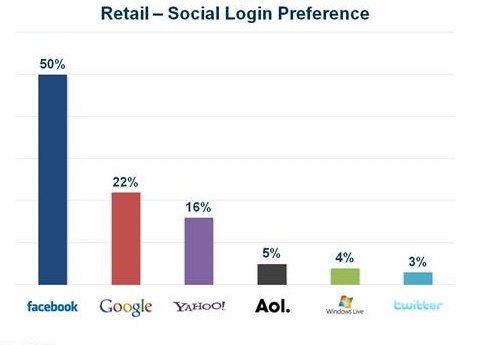 On mobile devices, Facebook and Google lead the pack by a considerable margin. Twitter’s share (11%) is greater on mobile devices than desktop platforms. The data above examines logins in the U.S., says Janrain, and the data internationally presents different trends. For example, Windows Live is twice as popular in Europe as a sign-in choice when compared with the U.S. Hyves commands as much as 60% share of all social logins on websites in the Netherlands, and regional portals such Web.de and GMX are popular in Germany. In Southeast Asia, Yahoo is the popular social login choice, and Google performs well in Brazil due to the popularity of Google’s social network Orkut.