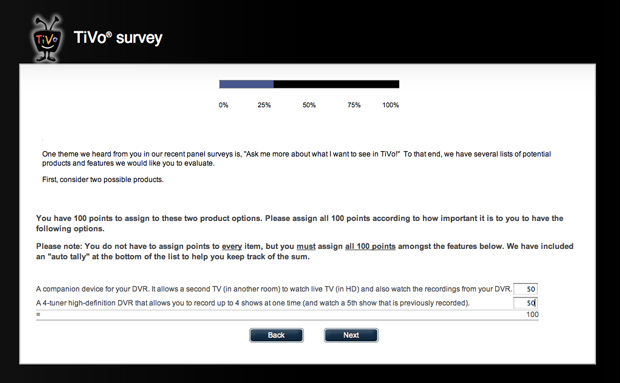 TiVo is a fun company to watch mainly because they move at such a slow pace. Updates come on a seemingly yearly basis and new hardware launches with Hally’s Comet. It’s been just over a year since the TiVo Premiere launched and the highly-touted HD interface is still laggy and often reverts to the old SD scheme. So imagine my reaction when Dave Zatz posted an excerpt from a recent TiVo survey regarding interest in a 4-tuner DVR. Yeah, I’m not exactly expecting such a model before the end of the decade.

The thought is good. I totally want a 4-tuner TiVo that would allow me to record four TV shows while watching a fifth off the hard drive. That way my wife can record all her dumb cake/little people shows while I watch the Wings destroy the Coyotes. I believe such a device would only require a big hard drive and two Multi-Stream CableCard decoders with cards.

Still, let’s remember what’s important, though. Hopefully TiVo finishes the damn HDUI before moving onto a new project. I mean, it’s been over a year and the UI still only uses one core on the Premiere’s dual-core platform. Sad.