Well this is interesting. Amid all the hoopla about the new iOS Twitter client Tweetbot tonight, people began noticing something. In The “Requirements” section of the App Store, there’s something odd listed. Alongside the usual iPhone, iPod touch, and iPad compatibility, apps are being listed as compatible with something named “ix.Mac.MarketingName”.

Yep. Weird. And this is all over the App Store right now.

Now the big question: is this just some fluke, a bug — or is this actually a placeholder for something much more? A fourth type of iOS app device perhaps?

Right now, we’re going to lean towards it simply being a bug. A couple sources we’ve pinged who might know something about this matter seem to have no idea what this is about.

But the “MarketingName” aspect of it is particularly interesting. Could this be some truly top secret project that Apple hasn’t even named yet? But if that’s the case, what on Earth is the code string doing in the App Store already? And what’s up with the “Mac” aspect?

Again, probably nothing major — this would be quite a way for Apple to let a new project slip, it’s all over the App Store! But nothing like some late night speculation about future Apple would-be enigma projects. 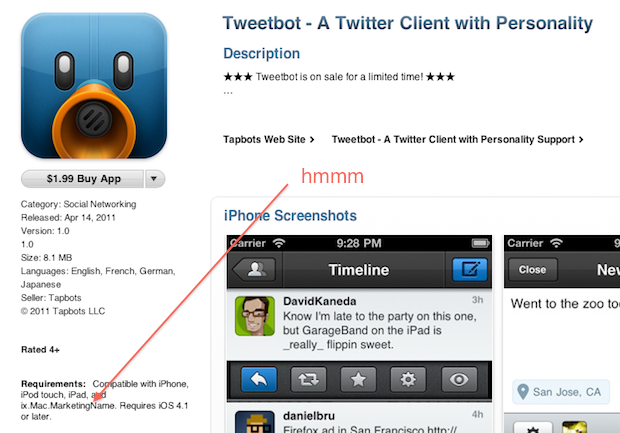